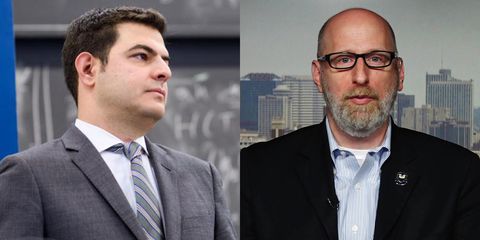 I have not been following this whole David French–Sohrab Ahmari dust-up happening right now conservative circles, but I am guessing it has something to do with Trump.

But I did get a kick out of this exchange between an editor at First Things and David French.

In his response to @SohrabAhmari, @DavidAFrench criticizes Trump as “A man who proudly hangs a Playboy cover on the wall of his office.”

It’s strange to hear this criticism coming from French, who proudly watches an explicit TV series, Game of Thrones.https://t.co/a7bQGWdyWV

I wasn’t going to respond to this nonsense, but now it keeps popping up in my timeline.

Sorry I criticized you for championing smut.

If I had my way, the people who celebrate it would not be taken seriously when they decry smut elsewhere.

As I noted above, I am not really following this debate.  But when Alan Jacobs weighs-in on something I read it.  Here is a taste of his piece at The Atlantic:

A story commonly told these days on both the left and the right says that American Christians, and especially evangelicals, are solidly behind President Donald Trump. The real story is far more complex, and has led many Christians to some fairly serious soul-searching, and others to ask hard questions about whether we even know what an “evangelical” is. Among Christians, as among so many other Americans, one of the chief effects of the rise of Trump has been to widen some fault lines and expose others that we didn’t even know existed. It is at least possible that some good will come from this exposure.

You can see some of these fault lines opening up in a recent controversy that has greatly occupied many journalists, scholars, and ordinary people who care about the relations between Christianity and conservatism. The controversy began when Sohrab Ahmari, the op-ed editor of the New York Post, tweeted, “There’s no polite, David French-ian third way around the cultural civil war”—referring to the lawyer, former soldier, and senior writer of National Review who has often made the case that Christians in the public arena need to practice civility. Ahmari then expanded that tweet into a full-scale attack on French, and since then, the conservative world has been fairly obsessed with adjudicating the dispute.

It’s important to note that Ahmari sees the differences between him and French as rooted, ultimately, in their different Christian traditions: Catholicism for Ahmari—who recently published a memoir of his conversion—and evangelical Protestantism. But whether this is indeed the heart of the matter, the dispute so far hasn’t fallen out that way. Some Catholics are with French, some Protestants with Ahmari. And in any case, I’m more interested in the ways this dispute illuminates questions that all Christians involved in public life need to reckon with than in choosing sides. How Christians choose to reckon with these questions will have consequences for all Americans, whether religious or not.