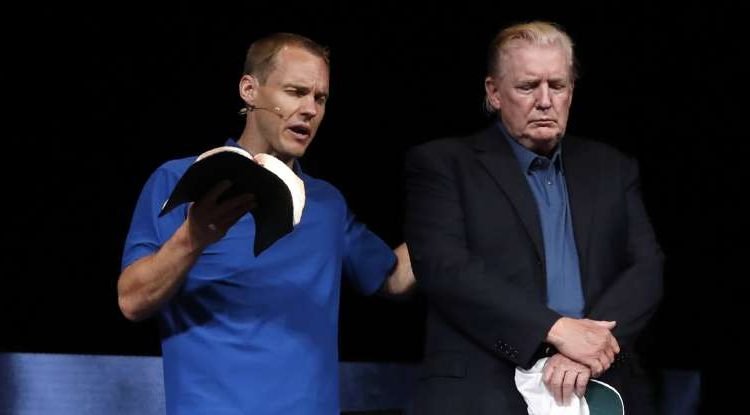 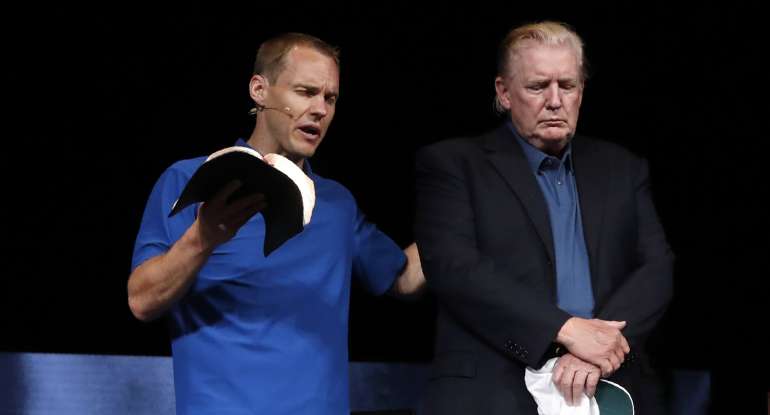 As some of you know, yesterday Donald Trump made a short visit (some outlets are reporting 16-minutes) to McLean Bible Church, an evangelical megachurch in Vienna, Virginia.  David Platt, the pastor of the church, prayed for Trump.

Why did he go?

A White House spokesperson named Judd Deere said that Trump visited the church “to visit with the Pastor and pray for the victims and community of Virginia Beach.”

I don’t know if McLean Bible Church pastor David Platt “visited” with Trump before he took the stage and prayed for the president.  As I understand it, Trump showed-up in the middle of the service.  The president did not make any public statement.  Platt’s prayer said nothing about Virginia Beach.

Trump actually came to McLean Bible Church to throw a bone to his evangelical base.  This was the day that Franklin Graham set aside to pray for the president.  I wrote about this here and here and contributed to this CNN report.

His visit had nothing to do with Virginia Beach.  I have no idea why Deere said that it was about the Virginia Beach shooting.  If he was honest, and simply said that Trump was there to honor Franklin Graham’s call for prayer, he probably would have scored more political points with the visit.  Or maybe Deere had no clue as to why Trump showed-up at McLean Bible Church.  He was covering the weekend the shift in the press shop, hear about the spontaneous visit, and simply offered the Virginia Beach explanation off the top of his head because it made sense.

One of the best things I have read on this comes from David Bains, a religion professor at Samford University.   He writes:

Yesterday afternoon was surely one of the odder moments in the history of presidential churchgoing. Returning from midday golf game at the Trump National Golf Club in Loudoun County, Virginia, the President stopped at McLean Bible Church at 2:20 pm to appear in a regularly scheduled Sunday service that started at 1:00 pm. The church is about 11 miles from the golf course. He was at the church for fifteen minutes, and in the service for only a portion of that.

The White House said that the purpose of the visit was to visit with the church’s pastor, David Platt, and pray for victims of Friday’s deadly mass shooting in Virginia Beach. Yet, while Trump was in the church there were no public prayers for the victims of the Virginia Beach shooting. Rather, Platt seemed to understand that the visit was linked to the special national day of prayer for the president that Franklin Graham and others had declared. Given that the president was being criticized in the morning for not attending church on his day, it is reasonable to conclude as historian John Fea has that that was a key reason behind the president’s church visit.

While Platt is generally being praised for offering a prayer for the president and other leaders that was not an endorsement of Trump, the White House defined the meaning of the the event in the media. Most reports have stated that the purpose of the visit was to pray for the victims of Friday’s shooting, and the 170-some miles between the church and the location of the shooting is lost on those unfamiliar with Virginia.

Platt did not endorse Graham’s designation of June 2 as a “SPECIAL Day of Prayer for the President of the United States, Donald J. Trump, that God would protect, strengthen, embolden, and direct him.” The extemporaneous prayer Platt offered while standing next to the President did not focus on the Graham’s key themes of protection and emboldening, nor did it speak of the president as being attacked. But the optic of the prayer, with the president looking weary and slightly disheveled while a young pastor prays with a hand on the president’s back and proving useful to those who wanted to see the president being prayed for in a church on this day.

In a later tweet, Bains stressed the fact that McLean Bible Church had a 1:00pm service:

They had an afternoon service that started at 1. Plus they are big and evangelical. I think that is why.

Perhaps it went down this way: Trump was on the golf course all morning and probably saw people on Twitter criticizing him for golfing while so many of his evangelical supporters were in church praying for him.  He and his staff did not like the optics, but it was too late in the day to find an evangelical service to attend.  Most evangelical congregations do not have afternoon services.

McLean Bible Church in Vienna actually does have an afternoon service.  It starts at 1:00pm.  Jackpot!

If Trump and his crew hurried, they could get to Vienna before the service ended.  Trump showed up at 2:25pm. (Most evangelical services last anywhere between 60 and 75 minutes. Did McLean extend the service?)  But there was no time to comb his hair or take off his golf shoes.  The fact that the McLean pastor David Platt is not a court evangelical and did not sign Franklin Graham’s call for prayer was irrelevant by this point.

Finally, it is worth noting that some media outlets and popular tweeters simply took the White House at its word about the purpose of the visit and seemed to have no clue that this was all about Graham’s call for prayer and not about Virginia Beach.

ADDENDUM (June 3, 2019 at 9:12 PM):  According to commentator Kenny Brown (see his comment below), Mike Pence occasionally attends McLean Bible Church. Perhaps this also has something to do with how Trump ended up there.