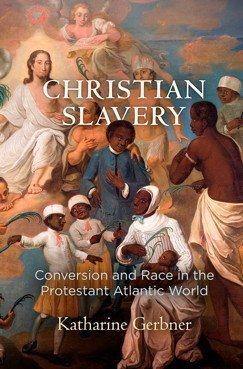 Katharine Gerbner is Assistant Professor of History at the University of Minnesota.  This interview is based on her book,  Christian Slavery: Conversion and Race in the Protestant Atlantic World (University of Pennsylvania Press, 2018).

JF: What led you to write Christian Slavery?

KG: I started Christian Slavery with a simple question: how could seemingly good people support something that was morally abhorrent? Specifically, I wanted to know why European Christians, and especially missionaries, accepted slavery. What I was uncovered was a deeply troubling story that is important to understand today. It shows how people with good intentions can play a terrible role in perpetuating injustice, and it demonstrates the long history of complicity between Christianity and slavery.

JF: In 2 sentences, what is the argument of Christian Slavery?

KG: I have three main arguments: (1) far from being forced to convert, enslaved and free blacks had to fight their way into Protestant churches; (2) Protestant missionaries paved the way for pro-slavery theology by arguing that conversion would not lead to freedom for the enslaved; and (3) White Supremacy grew out of “Protestant Supremacy”—the idea that enslaved people could not become Christian.

JF: Why do we need to read Christian Slavery?

KG: There’s a lot of discussion about White Supremacy right now. In those conversations, it’s essential to explore what we mean by “whiteness” and where this term comes from. What history shows us is that the word “white” replaced the word “Christian” in colonial records as a way to justify enslavement. In other words, whiteness was created under slavery in order to exclude people of African descent from freedom. So if we really want to understand White Supremacy, and to combat it, we have to acknowledge the complex relationship between Christianity and slavery.

My book also shows the possibilities for combating racism & White Supremacy. Some evangelical Christians and Quakers played a central role in the abolitionist movement, showing that Christianity could be used to support emancipation. And most importantly, enslaved and free blacks who fought their way into Protestant churches defined their faith around the concept of liberation, in opposition to pro-slavery theology.

KG: I studied Religion and Middle Eastern Studies in college. But when it came time to write a Senior Thesis, I chose a historical document: the first antislavery petition written in the Americas, which was authored by German and Dutch Quakers in 17th c. Pennsylvania. I started by researching the origin of that document and its reception. As I did so, I realized that the anti-slavery Protest was rejected by English Quakers in Philadelphia. I was surprised by this—I grew up in Philadelphia and attended a Quaker school, but I had only learned about Quaker abolitionism. I was shocked to discover that there were Quakers who owned slaves. I wanted to know what else had been left out of the conventional histories. I started there, and I haven’t stopped researching since.

KG: I’m writing a book about slave rebellion and religious freedom, tentatively called Constructing Religion, Defining Crime. I noticed in my research for Christian Slavery that black Christians and other religious leaders were often blamed for slave rebellions. In response, white authorities created laws designed to criminalize black religious practices. My new research suggests that we cannot understand religion – or religious freedom – without examining slave rebellion. The history of slavery can help us to understand how and why some religious practices have been, and continue to be, excluded from the lexicon of “religion” and even criminalized.