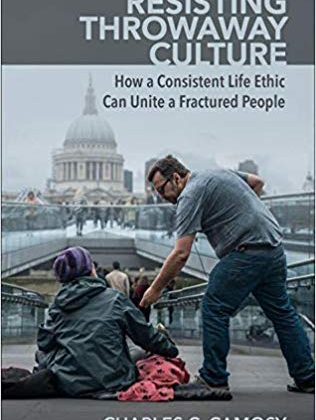 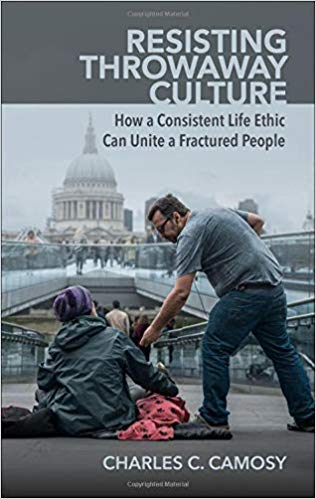 I am looking forward to getting my hands on a copy of Charles Camosy‘s new book Resisting Throwaway Culture: How a Consistent Life Ethic Can United a Fractured People.    Camosy offers us a small glimpse of his argument in a recent piece at Religion News Service.  Here is a taste:

A revitalized Consistent Life Ethic [CLE] — especially as understood and articulated in the Roman Catholic tradition by Cardinal Joseph Bernardin, Pope St. John Paul II, Pope Benedict XVI, and (especially) Pope Francis — could provide a path to unifying a fractured culture around a vision of the good.

Through the church’s CLE, rightly understood, a new generation can not only challenge our impoverished and incoherent political imagination but also can begin the hard work of laying out the foundational goods and principles upon which whatever comes next can be built.

What the CLE really opposes is what Pope Francis calls “throwaway culture” — a mentality in which everything has a price, everything can be bought, everything is negotiable. This way of thinking has room only for a select few, while it discards all those who are unproductive.

Such a culture reduces everything — including people — into mere things, whose worth consists in being bought, sold, or used, and which are then discarded when their market value has been exhausted. Francis insists that the commandment “Thou shalt not kill” applies clearly to our culture’s “economy of exclusion.” In the pope’s view, “Such an economy kills.”

In a throwaway culture, a primary value is maintaining a consumerist lifestyle. To cease caring about who is being discarded, most of us must find a way to no longer acknowledge their inherent dignity. Instead of language that affirms and highlights the value of every human being, throwaway culture requires language that deadens our capacity for moral concern toward those who most need it.

The values of the CLE, in other words, are the irreducible dignity of the person, nonviolence, hospitality, encounter, mercy, conservation of the ecological world and giving priority to the most vulnerable.