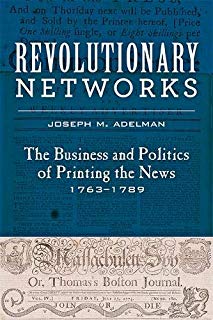 Joseph Adelman is Assistant Professor of History at Framingham State University in Framingham, Massachusetts.  This interview is based on his new book, Revolutionary Networks: The Business and Politics of Printing the News, 1763-1789 (Johns Hopkins University Press, 2019.

JF: What led you to write Revolutionary Networks?

JA: The book sits at the confluence of life and professional experiences that have shaped my thinking for several decades. I’ve long been interested in the American Revolution and in particular the politics of rebellion—how and why the “thirteen colonies” (and only those) decided to form a new nation. Second, between college and graduate school I worked for two years as the communications director for a New York state assemblyman. The work fascinated me, but because I was leaning towards becoming a historian, I often found myself stepping back from my day-to-day responsibilities to think about how various processes and structures of both politics and the media interacted and influenced what happened. So when I came to considering a research topic, I wanted to apply the questions I have about contemporary media to understand how the business of media intersected with politics during the era of the Revolution.

JF: In 2 sentences, what is the argument of Revolutionary Networks?

JA: During the American Revolution, printers—artisans who worked with their hands at the press and also engaged in intellectual labor of editing and publishing—shaped political debate through the business practices of their trade. From the networks that printers developed across the colonies and around the Atlantic world to individual editorial decisions made in a single printing office, Revolutionary Networks shows how printers navigated a wide range of political and commercial environments to attempt to run successful businesses and also make an impact on the content of political debate.

JF: Why do we need to read Revolutionary Networks?

JA: We often assume that the news media were important during the American Revolution, and in fact many historians who have produced great scholarship on the Revolution require that to be true in order for their arguments to work. But very few have asked how the process of news creation worked—Revolutionary Networks fills that gap. It may seem like a narrow point at first, but what the book tries to document at a really close-in level is that those details matter a great deal. It changes our understanding of the politics surrounding the American Revolution that these artisans were making choices every day about what news to publish, where to situate it in context with other stories, whether to revise or amend the text they received, and so on. What appears on the surface to be a clear articulation of a political position instead is the result of a decisions and negotiations that focused not only on the beliefs of a text’s author but also—and in fact often more so—on the political perspective and business interests of the printer/editor who published the material.

JA: I’ve been fascinated by history in general and the American Revolution in particular since I was in elementary school—as memory has it, my second-grade teacher, Mrs. Deuel, gave me a book about the Revolution and it was off to the races. But I decided I wanted to pursue a career as a historian around my sophomore year in college as I immersed myself in scholarly readings. I talked about it with a few of my professors, who cautioned me that it was a difficult path in some ways but offered lots of flexibility (this was around 2000, well before the academic jobs crisis, and came from a privileged undergraduate institution). After the two years with the New York State legislature, I knew I wanted to get a Ph.D. to answer the call to write and teach about the past.

JA: One of the key institutions that made the printing trade function was the Post Office, and the key player in that entity was Benjamin Franklin. I’ve wanted to do a project that focuses a bit more on Franklin and I’m fascinated by the contradictions in the Post Office’s development—people saw it as a government institution but it has always functioned in many ways as a profit-seeking business. So I’m now writing a history of the post office in early America and the Atlantic world.