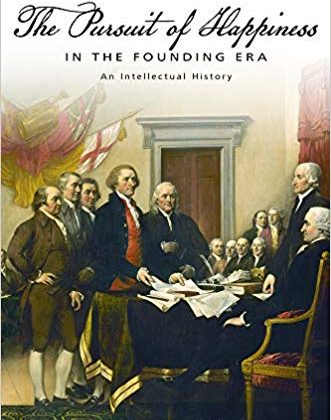 JF: What led you to write The Pursuit of Happiness in the Founding Era?

In their later writings, Jefferson and John Adams both claimed that the Declaration was not intended to be a statement of new ideas. Taking my cue from them, I began exploring old ideas–key strands of thought that were most influential at the Founding: English law and legal history; the history and philosophy of classical antiquity; Christianity; and the Scottish Enlightenment’s focus on Newtonian Science. These strands of thought, while conflicting in their particulars, nevertheless converged at a place of particular meaning. That place of particular meaning was the late-eighteenth understanding of “the pursuit of happiness.”

JF: In two sentences, what is the argument of The Pursuit of Happiness in the Founding Era?

CC: Far from being a glittering generality or a direct substitution for property, “the pursuit of happiness” had a distinct meaning to those who included the phrase in two of the eighteenth-century’s most influential legal texts: William Blackstone’s Commentaries on the Laws of England (1765-69) and the Declaration of Independence (1776). That distinct meaning included a belief in first principles by which the created world is governed, the idea that these first principles were discoverable by man, and the belief that to pursue a life lived in accordance with those principles was to pursue a life of virtue, with the end result of happiness, best defined in the Greek sense of eudaimonia, or human flourishing.

JF: Why do we need to read The Pursuit of Happiness in the Founding Era?

CC: Today, we continue to invoke our unalienable right to the pursuit of happiness in a wide variety of settings. The right to “the pursuit of happiness” shows up everywhere from music and movies to U.S. Supreme Court cases, with a bewildering array of meanings attributed to the phrase. This work clarifies the meaning of the unalienable right to the pursuit of happiness by placing the phrase within its broader eighteenth-century legal and historical context. The methodology behind this exploration highlights not only the interdisciplinary depth and breadth of the Founders’ intellectual world, but also the unexpected places where a variety of these influential, eighteenth-century schools of thought converged.

CC: Throughout college, I pursued my love for English and education while remaining interested in law. I was particularly fascinated by the ideas that are embedded in our laws and how those laws—and the ideas undergirding them–change over time. Following my graduation from Truman State University, I learned of the University of Virginia School of Law’s dual degree program in American legal history. I still vividly remember the excitement I felt as I read the program description—it was everything I had ever wanted to study! I am happy to say that I could not have found a more welcoming and intellectually invigorating home for the study of early American legal history. As an early American legal historian who views scholarship as an extension of teaching, I remain so grateful for the outstanding education I received from Truman State University in teaching pedagogy, critical thinking and analysis, and the close reading of texts and the fantastic education in law and American legal history I received at the University of Virginia, first under Barry Cushman and Charles W. McCurdy in the J.D./M.A. program and then when I returned to Virginia to work under Prof. McCurdy again for my Ph.D. It has been a true joy to work in this field.

CC: I am fascinated by how our legal use and understanding of “the pursuit of happiness” has changed over time. I am currently working on a project entitled The Pursuit of Happiness after the Founding: Case Law and Constitutions. This project explores the use of “the pursuit of happiness” in key legal texts from 1776 forward, including constitutions and court cases at both the state and federal levels.