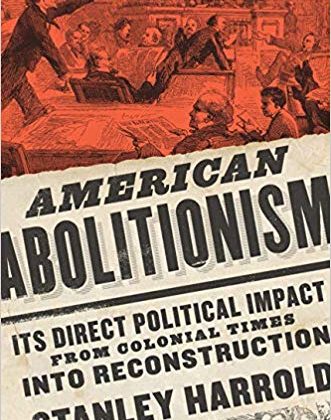 Stanley Harrold is Professor of History at South Carolina State . This interview is based on his new book, American Abolitionism: Its Direct Political Impact from Colonial Times into Reconstruction (University of Virginia Press, 2019).

JF: What led you to write American Abolitionism?

SH: For years I concentrated my research and writing on the physical clashes between antislavery and proslavery forces on both sides of the North-South sectional border. Particularly in writing Border War: Fighting over Slavery before the Civil War (University of North Carolina Press, 2010), I came to appreciate how these confrontations influenced the sectional politics that led to the Civil War. Those involved included escaping slaves, black and white abolitionists who encouraged and aided the escapees, and defensive white southerners who pursued the escapees. But, in focusing on these clashes and those involved, I limited the book’s scope to a restricted region and a relatively brief time period. As a result I began to wonder about other ways that abolitionists directly impacted American politics and government over a much more extended period, stretching from the late 1600s into the late 1860s. Also the recent upsurge in interest among historians regarding the abolitionists’ impact on politics has emphasized their indirect political impact through preaching, holding public meetings, and circulating antislavery propaganda in attempts to influence public opinion. Because other broader forces than these influenced northern popular opinion, this is an impressionist enterprise. Therefore American Abolitionism focuses precisely on direct abolitionist impact on colonial, state, and national government, through petitioning, lobbying, and personal contacts with politicians, as well as the direct impact of abolitionist physical action on northern and southern politicians.

JF: In two sentences, what is the argument of American Abolitionism?

SH: American Abolitionism argues that, beginning during the Colonial Period and extending through the Early National period, the Jacksonian Era, the 1850s, the Civil War, and Reconstruction, abolitionists’ direct political tactics helped influence the course of the sectional conflict. The book emphasizes that even those abolitionists who emphasized moral suasion and refused to vote engaged in effective efforts directly to influence formal politics.

JF: Why do we need to read American Abolitionism?

SH: As I suggest above, the book provides a much more precise understanding than previous studies of the abolitionist impact on American politics and government over an extended period of time. It begins with Quaker abolitionist petitioning and lobbying from the 1690s into the 1770s. It discusses expanded efforts to influence politics, undertaken by the first antislavery societies, mostly at the state level, during the Revolutionary and Early National periods. It covers the expanded direct tactics undertaken by immediate abolitionists, aimed at Congress and begun during the late 1820s. It explores the relationships between abolitionists and the Free Soil and Republican parties from the late 1840s through the Civil War, including increasing abolitionist efforts to personally influence Radical Republicans and President Abraham Lincoln. The book concludes with an evaluation of such efforts.

SH: For me becoming an American historian was a gradual process. I enjoyed a fine liberal arts undergraduate education at Allegheny College, where I took courses in art, literature, philosophy, as well as history, and did not decide to major in history until the middle of my junior year. I graduated in 1968, while the Vietnam War was raging. I decided to go to graduate school at Kent State University in part because I was not sure what else to do and hoped being a graduate student might provide a continued draft deferment. At first I was not sure that I wanted to be a professional historian or continue in graduate school after earning a master’s degree in American history. But, as I learned more about the historical profession, and came under the influence of my adviser John T. Hubbell, I finally committed myself to a career as a professor of American history, with a concentration on the Civil War Era and the abolitionist movement.

SH: For the first time, I have not begun a new book project after completing one. I shall, though, remain co-author, with Darlene Clark Hine and Willian C. Hine, of the African-American Odyssey, the leading black history textbook, which is currently in its seventh edition. I shall also remain co-editor, with Randall M. Miller, of the Southern Dissent book series, published by the University Press of Florida.