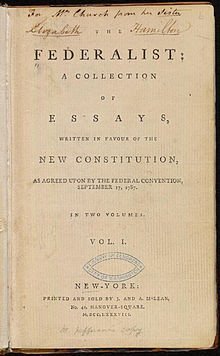 Danielle Allen of Harvard University makes the connection in a piece at The Washington Post. Here is a taste:

The Mueller report has finally brought us face-to-face with the need to address the “delicate and important circumstance of personal responsibility” in the nation’s chief executive, as Alexander Hamilton put it in Federalist 69.

To quote the Mueller report: “The President has no more right than other citizens to impede official proceedings by corruptly influencing witness testimony.” In addition, the president bears a second burden of personal responsibility — not merely to execute the powers of his office (for instance, hiring and firing) but also to execute those powers “faithfully.”

That question of faithfulness is what Hamilton had in mind when he referred to the “delicate and important circumstance of personal responsibility.” The constitutional apparatus gave to Congress the power and responsibility of addressing that delicate matter. The most important question now before us is whether Congress will use its power — and indeed, rebuild it after a period of decline — to reinforce two core principles of the Constitution: that the president is not above the law and that he or she should be held to a standard of faithfulness.

Here is Hamilton in Federalist 69:

The President of the United States would be liable to be impeached, tried, and, upon conviction of treason, bribery, or other high crimes or misdemeanors, removed from office; and would afterwards be liable to prosecution and punishment in the ordinary course of law. The person of the king of Great Britain is sacred and inviolable; there is no constitutional tribunal to which he is amenable; no punishment to which he can be subjected without involving the crisis of a national revolution. In this delicate and important circumstance of personal responsibility, the President of Confederated America would stand upon no better ground than a governor of New York, and upon worse ground than the governors of Maryland and Delaware.