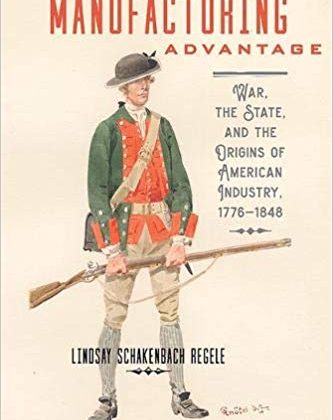 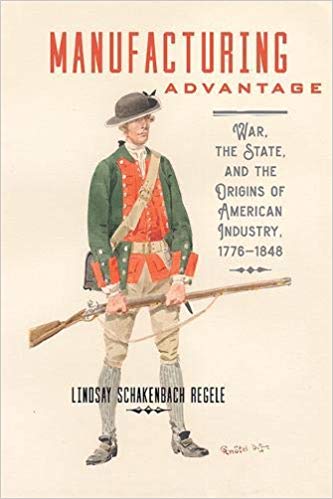 Lindsay Shakenbach Regele is Assistant Professor of History at Miami University. This interview is based on her new book, Manufacturing Advantage: War, the State, and the Origins of American Industry, 1776-1848 (Johns Hopkins University Press, 2019).

JF: What led you to write Manufacturing Advantage?

LSR: When I started writing this book, it had nothing to do with manufacturing. It actually started as a study of piracy and US-Spanish relations during the Latin American independence wars. I had started researching US shipping claims against the Spanish government, while at the same time becoming more interested in the relationship between business and state power. I discovered that one particular group of Boston merchants received a big chunk of federal funds as a result of the settlement of these claims. These same merchants were simultaneously developing the nation’s first fully integrated textile mills in eastern Massachusetts and were able to funnel the capital from the claims settlements into factory development. This caused me to wonder how else they might have benefited from state support, whether direct or indirect. I also was interested in US-South American trade. I had seen references to dye stuffs and hides being imported from South America, and finished goods being exported there as early as the 1820s.

Ultimately, I came to study manufacturing—specifically the arms and textile industries– through diplomatic papers. The richest source was the consular dispatches, which are all these letters, pamphlets and trade statistics that US consular agents sent back to the state department from their various posts in Latin American ports. In these documents, I began to see consuls negotiating favorable trade policies, and doing so increasingly for manufactured goods, such as Massachusetts-made coarse fabrics. I also saw several references to arms imports into South America from the US, which piqued my interest. The United States was supposedly neutral while Latin America fought its independence wars against Spain and Portugal. I did not immediately pursue the arms connection, but after another historian mentioned that a lot of industrial innovation was happening in the arms industry in Springfield, Massachusetts, I decided to check out the records at the New England Branch of the National archive. In a rare stroke of research luck, on my first day saw several mentions of arms sales to Buenos Aires. These letters were incredibly exciting to find, because the United States could not for diplomatic reasons openly supply weapons to colonies in rebellion. Federal officials had to arrange these sales in oblique ways through third parties, keeping it as clandestine as possible. Probably for that reason, those were the only references to South American arms sales in federal armory records that I ended up seeing. The more I read, though, the more I became interested in all these letters written from private gun contractors to the federal armory. They were totally dependent on government patronage. Basically, despite the “right to bear arms” in the United States, there was not enough civilian demand to create a robust arms industry. Textile manufacturers had a different relationship to the federal government; there was a civilian market for textiles in a way there was not for firearms. Government policies, however, shaped the way the industry developed. Diplomatic support, wartime initiative, and trade legislation engendered the growth of certain industries and factory locations. When I began to think in terms of national security it all made sense. Diplomacy with Spain, or any other nation, meant little without military and economic security. By the time I got to that realization, I had my reason for writing the book.

JF: In two sentences, what is the argument of Manufacturing Advantage?

LSR: In the period from the Revolutionary War to the Mexican American War, the United States industrialized as the result of national security concerns. Government agents and private producers responded to the opportunities and challenges posed by European and Native American warfare and treaty-making by investing in industrial capitalism, which generated revenue and martial prowess for early national development.

JF: Why do we need to read Manufacturing Advantage?

LSR: Because it provides a new interpretation of early national United States political economy by connecting war, trade, and state power to industrial development. It is the first work to study the development of two hallmark American industries–arms and textiles–side by side, and to place the rise of industry in the United States in the context of broader geopolitics. Manufacturing Advantage brings a wider cast of characters to the narrative of the American Industrial Revolution, as it closely investigates the relationship between private producers and War and State department officials, departments that I argue are stronger in these early years than other scholars have assumed. The individuals responsible for this system of manufacturing ranged from inventive mechanics in small New England towns and wealthy merchants in Boston to ordnance officials in Washington and consular agents in Lima, Peru. The sum total of their actions and relationships shed new light on how and why industry developed the way it did in the United States.

LSR: My decision to become a historian started when I switched majors during college. I remember writing “history” on my new major form, and feeling a sense of purpose and contentment (I think partly because as a child I had loved historical fiction and my father was always reading history books and waxing poetic about various historical sites and events). At that point, though, I had no idea that I would end up teaching, writing, and researching for a living. After graduating, I spent a year working as a long-term substitute teacher and track coach, while taking secondary education classes. My plan was to pursue teaching certification, but I also wanted to continue research, so I applied for an M.A. in history. I started working on my M.A. the following fall, and fell in love with the research process. During my first semester, I wrote a seminar paper on U.S. involvement in Francisco de Miranda’s failed Venezuelan revolution in 1806 and became obsessed with researching this event as it played out in the U.S. newspapers and political rumors. I decided to turn this project into my thesis and to apply for PhD programs. I was fortunate to have wonderful professors and advisers in both college and graduate school who inspired and facilitated my transition to the historical profession.

LSR: My next project is a dual biography of Joel Roberts Poinsett (1779-1851) and the early national political economy. While Americans see the poinsettia every December without realizing its namesake, Poinsett’s career as a secret agent in South America, America’s first minister plenipotentiary to Mexico, U.S. congressman, and secretary of war helped shape the nation in which we live today. The last biographies of Poinsett were published in the 1930s and I think the time is ripe to revisit his various activities on behalf of the U.S. government. Over the past several decades, scholars have brought renewed attention to “capitalism” and “the state,” but there’s still a lot of ambiguity about what exactly each of these terms mean, when and where capitalism actually began, and how “strong” or “weak” the early U.S. state was. I’m hoping to use Poinsett to bring precision to these two nebulous concepts by connecting their theoretical underpinnings with on-the-ground practices. What, for example, did Poinsett’s secret code-writing in Chile reveal about early U.S.-Latin American relations? How did his intertwined business and political activities in Mexico shape continental politics? How did his experiences in Latin America in the 1810s and 1820s influence his administration of Indian removal and the Seminole Wars in the 1830s? And how did the sum total of all these activities reflect and influence the intersection of violence and economic development in the early republic? I’ve gone through many of Poinsett’s personal papers at the Historical Society of Pennsylvania and will be spending the better part of this summer at the Library of Congress conducting more research.