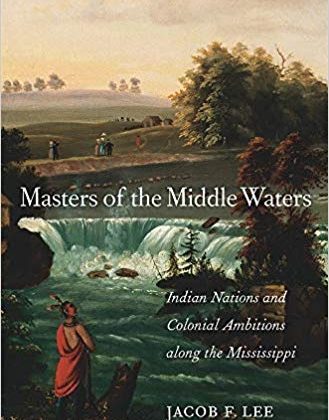 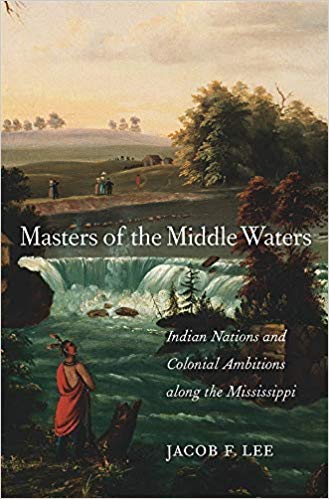 Jacob Lee is Assistant Professor of History at Penn State University. This interview is based on his new book, Masters of the Middle Waters: Indian Nations and Colonial Ambitions along the Mississippi (Belknap Press, 2019).

JF: What led you to write Masters of the Middle Waters?

JL: In large part, my research is driven by things that surprise me. Years ago, I read about George Rogers Clark’s campaign into the Illinois Country during the American Revolution and realized that, although Clark and his soldiers had gone to fight the British, they mostly encountered French farmers and merchants. Across the Mississippi, they interacted with Spanish officials at St. Louis. At that point, my knowledge about colonial America was more or less limited to the traditional, Anglo-centric narrative, and I wanted to know more about who these people were, why they were there, and how they fit into the story of early America.

That curiosity about the Illinois Country intersected with a longstanding interest in empires and colonialism. I’m especially intrigued by how empires work, how they acquire power, and why they succeed or fail in their ambitions. Because multiple Indian nations and four empires claimed part or all of the Illinois Country during the period I cover, that region provided an ideal place to pursue questions about power and resistance in early America and to think about different models of colonialism.

JF: In two sentences, what is the argument of Masters of the Middle Waters?

JL: Empires exist to dominate, but their authority is often proscribed, because it depends upon alliances with local peoples. In the North American midcontinent, power flowed through the kinship-based social networks that controlled travel, trade, and communication along the region’s many rivers.

JF: Why do we need to read Masters of the Middle Waters?

JL: Masters of the Middle Waters offers new ways to think about North America and its colonial history. First, it places kinship at the center of the story. Both Native peoples and European colonists organized their societies around kinship, and they understood the power of kinship ties in trade, politics, and diplomacy. Second, this book embeds intertwined Native and imperial histories in the physical geography of the midcontinent. Several of the continent’s most important rivers – the Mississippi, Missouri, Ohio, Illinois, Wabash, Tennessee, and Cumberland – all meet in a relatively small space in Middle America. These waterways were the conduits of most economic, military, and political activity in the region. Commanding those rivers allowed Native peoples and Europeans to vie for status, influence, and wealth. Bringing these two threads together demonstrates the power of personal relationships in a complex, dynamic environment to shape the course of empires.

Additionally, his book narrates the story of early America from the center of the continent. Waterways linked the vast interior of North America, and along them, social networks joined disparate and distant groups of Indians and Europeans in an interwoven social landscape of movement and interaction. As a result, the consequences of events in the midcontinent reverberated throughout eastern North America and across the Atlantic. The history of Middle America is central to the history of early America.

JL: I inherited my interest in American history from my parents. I don’t remember a time when I wasn’t fascinated by history. As I mention in the book, my earliest memory is walking up Monk’s Mound at Cahokia on a family vacation. But, the realization that I wanted to be a historian – and that I could become one – was slow in coming. I grew up in rural Kentucky far outside the world of academia. I was lucky to have great undergraduate mentors, who encouraged my passion for research and writing. Just as important, they also gave me guidance about the historical profession and helped me see the path that I ended up taking.

JL: My next project is a history of the Louisiana Purchase. Many historians have told the story of the negotiations between the United States and France over the purchase. This book picks up after the treaty was signed. Despite the agreement between the two empires, U.S. ownership of Louisiana was tenuous at best, and the decades after 1803 were filled with contests for control over the region. I am exploring how the U.S. state acquired and wielded power in the trans-Mississippi West but also how various groups of Native peoples and colonists in the region limited federal authority deep into the nineteenth century.