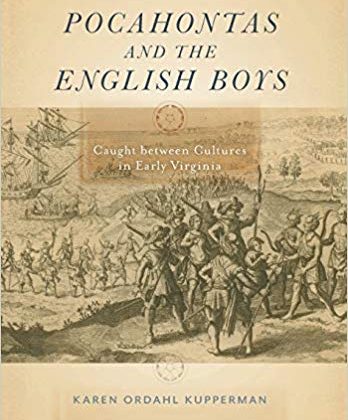 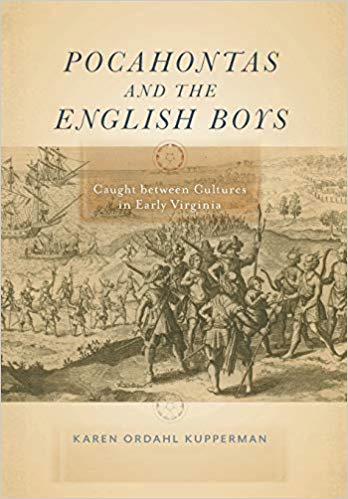 Karen Kupperman is Silver Professor of History Emerita at New York University. This interview is based on her new book, Pocahontas and the English Boys: Caught between Cultures in Early Virginia (NYU Press, 2019).

JF: What led you to write Pocahontas and the English Boys?

KK: In the years around 2007, marking the 400th anniversary of Jamestown’s founding, I spoke to many groups of high school history teachers, and those experiences made me see that they needed this story whose actors played key roles and were the ages of the kids they teach. As I worked on the book, I realized that the story has a broader impact and that it contributes to histories of consciousness and boundary-crossing in the early modern period.

JF: In two sentences, what is the argument of Pocahontas and the English Boys?

KK: Native and colonial leaders in the early colonies left kids with the other to learn the language and culture from the inside. The English saw kids as malleable and somewhat expendable, but they never foresaw that these go-betweens would form close relationships with the Virginia Natives who sheltered them. Colonial leaders ultimately came to mistrust them and disregarded their information, sometimes with disastrous consequences.

JF: Why do we need to read Pocahontas and the English Boys?

KK: Virginia’s beginning as an English colony has been seen as inferior, especially after New Englanders began to push the Pilgrims as the superior founders in the nineteenth century. Pocahontas and the English Boys works toward getting beyond the dominant narrative and finding the varied stories of people on all sides in these colonial situations, and how they coped with many different kinds of challenges. Through Pocahontas’s and the boys’ experiences we see Virginia’s Native people as real human beings with feelings and doubts.

To reinforce these insights, I was able to do a new transcription from the original pages of Henry Spelman’s Relation of Virginia, which is in the Harlan Crown library in Dallas. This is the first edition from the original manuscript since 1872, and it presents the memoir as it was actually written, correcting errors in the version we have all been using. Henry Spelman, Relation of Virginia, is out as a separate book from NYU Press.

KK: I went to Cambridge University for my PhD in 1973 expecting to become a Tudor-Stuart historian. But as I worked on my dissertation on eyewitness writing about the land and the people of America in the earliest period of English colonization, I came to think of myself as an American historian. Finally, through my scholarship and teaching, I realized that I am an Atlantic historian, meaning that relations around the Atlantic as well as those between London and Boston or Williamsburg are crucial to true understanding. I began the Atlantic history program at NYU and those of us at NYU construe the field broadly, moving as far as possible from the little boxes early American history had been constrained by.

KK: My next project looks at music as a mode of communication. In encounter situations where the new arrivals and the Native people did not have knowledge of the other’s language, participants on both sides sang and played musical instruments. This happened around the world. Music indicated peaceful intentions, but it could also be used as a ruse to cover hostile plans. Some intellectuals, such as Thomas Harriot who had been in Roanoke as a young man, began to think that music might be a way to create a universal language that could be understood by all. Harriot created a syllabary for coastal Carolina Algonquian and argued that recording languages by sound rather than meaning would facilitate universal communication.