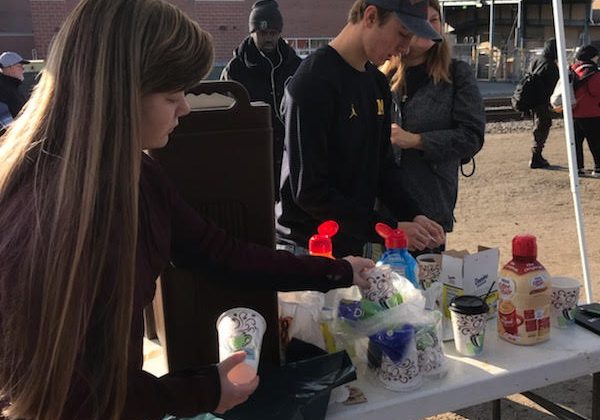 Annie Thorn is a first-year history major from Kalamazoo, Michigan and our intern here at The Way of Improvement Leads Home.  As part of her internship she will be writing a weekly column for us titled “Out of the Zoo.”  It will focus on life as a history major at a small liberal arts college. In this column she writes about her experience working with the homeless and how it connects with her study of history.  Enjoy! –JF

When I was in high school, my youth group went into Kalamazoo every month or so to serve our community’s homeless population. We would meet at gracespring Bible Church  bright and early on a Saturday morning, pray together, and head into the city armed with coffee, notebooks, and sometimes a pot of chili or a garbage bag full of winter clothes. When we got downtown we would set up camp next to the railroad tracks between The Kalamazoo Gospel Mission and Ministry With Community, pulling a tent and table from the back of one leader’s truck and loading it up with the supplies we brought from church. Some students stayed at the tent to serve coffee by the railroad tracks, while others split off in satellite groups and wandered down the streets with a pitcher, to pour a cup for any of the homeless men and women who remained scattered throughout the city.

We didn’t usually have much more than a cup of coffee to give the people we met on those cold Saturday mornings. Sometimes we had chili or doughnuts to offer, but we usually ran out pretty quickly. Other times we brought donations of warm clothes to give out, but those didn’t last much longer. We did have coffee though, and lots of it, a notebook to write down prayer requests, and several listening ears.

My youth pastor Kenneth Price taught me a lot through high school, but I’ll always remember his emphasis on learning people’s stories and learning their names. He showed me that the most important part of our interaction with the homeless isn’t the food we serve them or the clothes we offer them, but rather the conversations we have with them. Kenneth challenged us to not only learn the names of our homeless brothers and sisters, but to say them and remember them. We were not there to make ourselves look good or even to save fellow Kalamazooans from poverty, but rather to hear voices that aren’t often heard. By our listening, we offered the dignity, respect, and love inherent in being sincerely listened to.

I know a cup of coffee probably won’t change someone’s life, no matter how I wish it could. As believers, though, I think we are obligated to do what we can to hear people’s stories and to learn their names, no matter what they’ve done or who they are.

As historians I think we’re compelled to do the same thing. No, we don’t serve coffee or hand out warm gloves, but we do go out of our way to hear people’s stories, whether they’re still living or they died centuries ago. We learn their names, and we do our best to remember them. We listen to voices that have been ignored for years, and dig up others that were buried for years. We make eye contact with the ones some might choose to avoid, and uncover parts of our past that others would rather forget. Good historians are good listeners; they don’t have an agenda or some ulterior motive, they aren’t there to save lives or to make themselves look good. They listen.