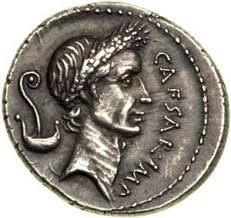 The following exchange takes place between Jesus and the Pharisees in the Gospel of Matthew, chapter 22: 16-22.

Then the Pharisees went and plotted how to entangle him in his words.16 And they sent their disciples to him, along with the Herodians, saying, “Teacher, we know that you are true and teach the way of God truthfully, and you do not care about anyone’s opinion, for you are not swayed by appearances.[b] 17 Tell us, then, what you think. Is it lawful to pay taxes to Caesar, or not?” 18 But Jesus, aware of their malice, said, “Why put me to the test, you hypocrites? 19 Show me the coin for the tax.” And they brought him a denarius.[c] 20 And Jesus said to them, “Whose likeness and inscription is this?” 21 They said, “Caesar’s.” Then he said to them, “Therefore render to Caesar the things that are Caesar’s, and to God the things that are God’s.” 22 When they heard it, they marveled. And they left him and went away.

Several Trump evangelicals are using this verse to justify their support for the POTUS.

Over at the Anxious Bench, Chris Gehrz asks a question about coins:

So how might we hear Matthew 22:21 differently if we’re looking at the metallic relief of a long-dead president who held limited power for a relatively short period of time, rather than that of a living emperor with the hubris to believe himself a figure of unimpeachable power?

Perhaps we’d then hear “render unto Caesar” as a reminder that, if American Christians owe limited allegiance to any secular authority, they owe it to no one person, but to the American people, who govern themselves through elected representatives sworn to protect the Constitution. The same Constitution that keeps even presidents from benefiting financially from their position, from obstructing the work of those who investigate lawbreaking, or from inventing fake national emergencies in order to subvert the work of those who make laws.

So render to God what is God’s: your image-bearing self commanded to love other image-bearers. And render to Trump what is Trump’s: your responsibilities as an American citizen to dissent from unwise and unjust uses of American power and to hold American demagogues accountable for their attempts to play Caesar.

Read Gehrz’s entire piece here.  It deserves a wide readership, especially for his thoughts on court evangelical Jerry Falwell Jr.’s use of this verse.