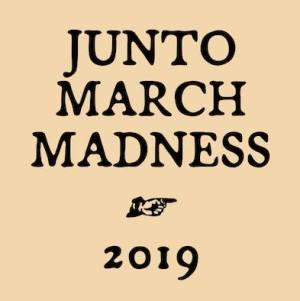 We have had fun over the years with the Junto early American history March Madness tournament.

In 2017, I chided the selection committee for undermining democracy.

Back in 2016, I was mad at the selection committee for putting my Journal of American History article “The Way of Improvement Leads Home: Philip Vickers Fithian and the Rural Enlightenment” in a first round battle against Jon Butler’s magisterial essay “Enthusiasm Described and Decried.”  Butler crushed us!

In 2015, the Journal of Philip Vickers Fithian was wiped-out in the first round by David Walker’s Appeal to the Colored Persons of the World.  I was very disappointed with Philip’s 13th seed!  I tried to make a case that voters should vote for Fithian because he was a “pompous ass,” “an insufferable prig,” and a “schlemiel.”

In 2014, my Was America Founded as a Christian Nation suffered a 60%-40% defeat in the first round at the hands of Rebecca Goetz’s The Baptism of Early America.

In 2019, the Junto tournament is focused on digital projects.  The 2019 March Madness brackets are out and it looks like The Way of Improvement Leads Home, despite nearly 400 early American history author interviews, dozens of podcast interviews with award-winning early Americanists, hundreds and hundreds of early American-themed posts, and an audience of nearly 4000 folks a day, will be heading to the NIT this year!  (Where was my campaign manager?)  For Shame! 🙂

Here are my endorsements:

Boston 1775:  A go-to blog for us here at The Way of Improvement Leads Home.  I check it every day and often repost J.L. Bell’s stuff

Common-Place:  Check out my 2003 article “Research as Relationship.”

Digital Paxton:  I will be using it extensively this semester in my Pennsylvania History course.

Enjoy the tournament.  To paraphrase Richard Nixon, “you won’t have Fea to kick around anymore.”