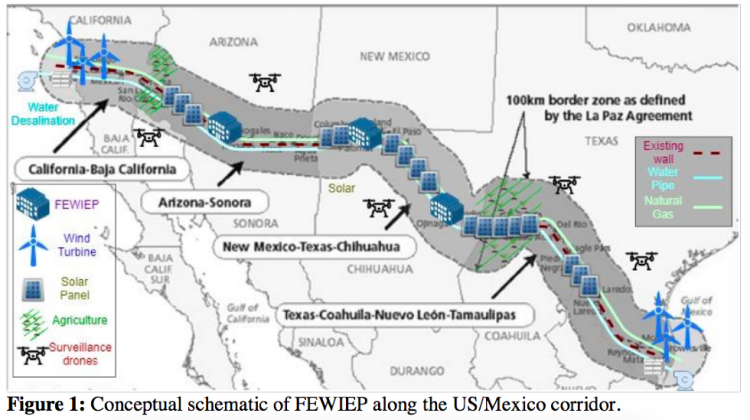 Over at Big Think, Stephen Johnson writes about a plan that might help with border security, create jobs, and bring green energy to the United States.  Here is a taste:

“What should the U.S. do about The Wall?” is a question that’s destined to divide many Americans. But there’s one proposal for the U.S.-Mexico border that, at least in theory, seems agreeable to everyone.

A consortium of 28 engineers and scientists has proposed that – instead of building a simple barrier along the approximately 2,000-mile border – the U.S. and Mexico could work together to build an industrial park along the divide that would include desalination facilities, solar energy panels, wind turbines and natural gas pipelines. The plan would not only provide the region with border security – considering it’d be a continuous train of heavily guarded industrial facilities – but also energy, water and jobs.

In a white paper, the team called it a “future energy, water, industry and education park” that “will create massive opportunities for employment and prosperity.”

“Just like the transcontinental railroad transformed the United States in the 19th century, or the Interstate system transformed the 20th century, this would be a national infrastructure project for the 21st century,” Luciano Castillo, Purdue University’s Kenninger Professor of Renewable Energy and Power Systems and lead of the consortium, told Phys.org. “It would do for the Southwest what the Tennessee Valley Authority has done for the Southeast over the last several decades.”