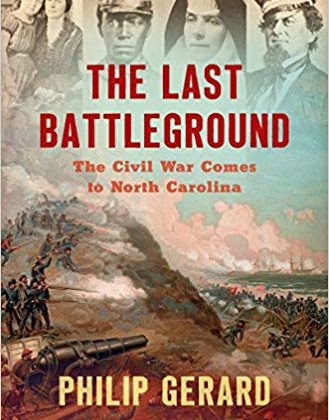 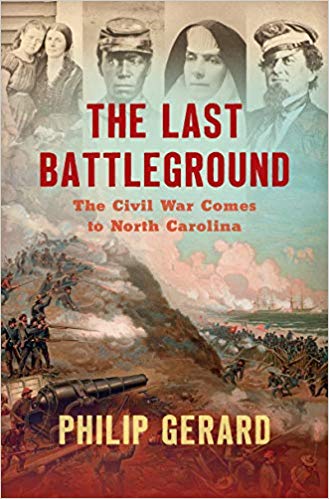 JF: What led you to write The Last Battleground: The Civil War Comes to North Carolina?

PG: The book began as a series of monthly narratives for Our State magazine, which has a wide readership in the South and beyond—fifty in all, spanning the four years of the Sesquicentennial of the conflict. The idea was to report the war as if it were happening right now. Addressing the American Historical Association in 1912, Theodore Roosevelt (was there ever a more vivid figure in American history?) said, “The true historian will bring the past before our eyes as if it were the present.” I wanted to make the war present—to get beyond the usual chess game accounts of regiments maneuvering here and there and put a human face on it. The Civil War was a profound human trauma that engulfed a nation, and for me the most important thing to remember is this: at the time, no one knew how it would turn out. All those caught up in it—soldiers, sailors, generals, privates, free persons of color, Cherokees and Lumbee Indians, liberated slaves, farm wives, wealthy plantation owners, working men and women, railroaders, even nuns of the battlefield who nursed the wounded—endured a true and terrible suspense. From the start I knew it was going to be a book—a whole coherent narrative made up of their many personal stories. So I re-reported all the narratives; edited, revised, and re-sequenced them; and added my own reflections.

JF: In two sentences, what is the argument of The Last Battleground: The Civil War Comes to North Carolina?

PG: North Carolina provides the perfect lens for capturing the whole epic sweep of the war: its white population was evenly divided in their loyalties; it was a homefront, a battleground, and occupied territory all at once; it contributed more soldiers than almost any other southern state, including so-called U.S. Colored Troops—and North Carolinians served on both sides; it was home to the Heroes of America, actively subverting the Confederacy; it was the refuge of the CSA government once it fled Richmond; it was the birthplace of Andrew Johnson, who gained the presidency upon the death of Lincoln and made such a shameful hash of Reconstruction; it was the ground of Sherman’s Final March and the cataclysmic Battle of Fort Fisher, guarding the last open port of the Confederacy; and it was the site of the Great Surrender of 90,000 troops that ended the war militarily and politically in the main theater of war.

JF: Why should we read The Last Battleground: The Civil War Comes to North Carolina?

PG: Our nation remains divided by many of the same existential issues for which the war was fought at such cost. The Civil War remains the unreckoned-with backstory of our current state of affairs, and if we understand it in all its terrible complexity, we might be better able to really enjoy “a new birth of freedom.”

PG: My interest in history goes all the way back to childhood. My father used to bundle us all into the station wagon and drive us to historical sites such as Gettysburg, Brandywine Creek, Valley Forge, and the Daniel Boone Homestead. Every year we would ride the excursion boat to Fort Delaware and explore its battlements and tunneled galleries, playing hide-and-seek with the uniformed Civil War reenactors.. Walking the ground even then instilled in me a sense that history was real and urgent, dramatic and important. I learned early that history has a future, and we are that future. And so I adventure into the past to find the truth of my own—and our own—identify.

PG: My novel Cape Fear Rising, which peeled the scab off a long-suppressed historical event in my hometown—a white supremacist coup and racial massacre—is relaunching in May in a special 25th anniversary edition with a foreword by Randall Kenan and an author’s afterword discussing the creative process of writing it and the ugly backlash that followed from some in the white community. I have been writing a narrative series called “Decades” for Our State—addressing the wartime 1940s and the 1950s, the cauldron of Civil Rights, among other stories. And I am writing a novel about the building of the Fontana Dam on the Little Tennessee—a wartime project conceived in deception and built in haste, which changed forever the lives of an entire displaced farming community—as well as inspiring a generation of kids who spent four remarkable years in a town of 5,000 people erected virtually overnight, as they watched their fathers construct the highest dam east of the Rockies.