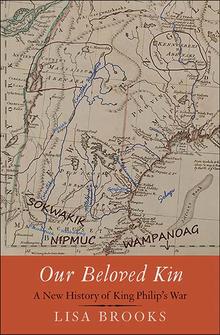 Brooks wins for Our Beloved Kin: A New History of King Philip’s War.

Here is a taste of an article on the winners at The New York Times:

A mammoth biography of Frederick Douglass and a new study of the 17th-century colonial American conflict known as King Philip’s War have won this year’s Bancroft Prize, which is considered one of the most prestigious honors in the field of American history.

David W. Blight’s “Frederick Douglass, Prophet of Freedom,”published by Simon and Schuster, was cited for offering “a definitive portrait” of the 19th-century former slave, abolitionist, writer and orator “in all his fullness and imperfection, his intellectual gifts and emotional needs.”

Lisa Brooks’s “Our Beloved Kin,” published by Yale University Press, was praised for how it “imaginatively illuminates submerged indigenous histories,” drawing readers into “a complex world of tensions, alliances and betrayals” that fueled the conflict between Native Americans in New England and European colonists and their Indian allies.

The Bancroft, which includes an award of $10,000, was established in 1948 by the trustees of Columbia University, with a bequest from the historian Frederic Bancroft.