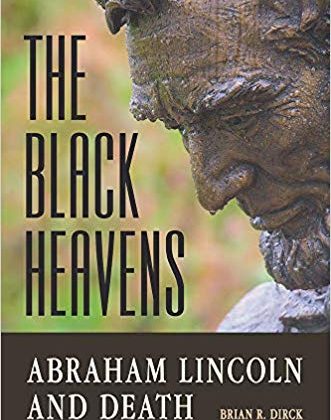 Brian Dirck is a Professor of History at Anderson University. This interview is based on his new book, The Black Heavens: Abraham Lincoln and Death (Southern Illinois University Press, 2019).

JF: What led you to write The Black Heavens: Abraham Lincoln and Death?

BD: This book actually began as something quite different. I originally planned to analyze Lincoln’s leadership during the last summer of the war, when he believed he would not be re-elected, when his emancipation policies were being widely criticized, and especially when Grant’s Wilderness campaign was creating a horrendous body count. I wondered how Lincoln was able to get Americans to accept such high numbers of casualties. This led to a more general question: so, what did Lincoln think of death and dying generally? And it turns out very little has actually been written about that; a few things here and there, but on the whole, surprisingly little. So, my book morphed into a general study of how Lincoln confronted and managed death and mourning, all the way back to his childhood.

JF: In two sentences, what is the argument of The Black Heavens: Abraham Lincoln and Death?

BD: I argue that the popular image of Lincoln as haunted by a hyper-emotional, tragic spectre of death is misplaced. In fact, throughout his life Lincoln learned to increasingly put emotional distance between himself and dying, which was the only way he could effectively lead the nation through the Valley of Death that was the Civil War.

JF: Why do we need to read The Black Heavens: Abraham Lincoln and Death?

BD: My book fills a hole in the vast Lincoln literature (and yes, there are still holes) by looking in depth at a subject too long neglected. Death could easily compete with emancipation and the Union as key themes in Lincoln’s life, and so we need a better understanding of how he handled all the death and dying with which he was surrounded. I also believe this is a contribution to the growing body of literature on what we might call the Civil War’s “dark side,” begun with Drew Gilpin Faust’s excellent study of death during the war. I hope my book in this way contributes not just to Lincoln studies, but Civil War scholarship in general.

BD: I think my interest in history and the Civil War began with my grandma telling me stories about the war as I grew up in central Missouri, stories about the guerrilla conflicts in the area, etc. She gave me a fascination with the era, and stories of the past generally. I was then blessed with the great fortune to study history as an undergrad at the University of Central Arkansas under Dr. Gregory J. Urwin (now at Temple), and then graduate work under the late Dr. Philip Paludan at the University of Kansas. Greg and Phil together gave me their infectious enthusiasm for teaching and writing about history, and Phil helped spark my ongoing interest in Lincoln’s life and career.

BD: I have begun work on a study of free speech during the war, focusing particularly on the conflicts between Lincoln and Clement Vallandigham.