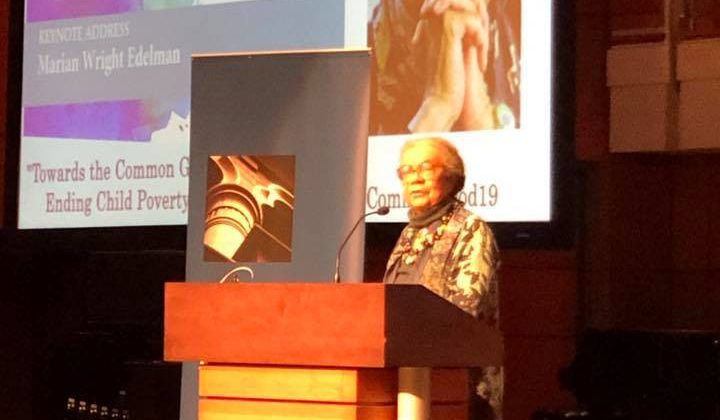 Annie Thorn is a first-year history major from Kalamazoo, Michigan and our intern here at The Way of Improvement Leads Home.  As part of her internship she will be writing a weekly column for us titled “Out of the Zoo.”  It will focus on life as a history major at a small liberal arts college. In this column she writes about what she learned from a recent lecture on campus.  Enjoy! –JF

If you were on Messiah’s campus last Thursday, you may have had the privilege to hear Marian Wright Edelman give the keynote address for Messiah’s 2019 humanities symposium titled “Toward the Common Good: Ending Child Poverty in the U.S.” A graduate of Spelman College and Yale Law School, and a recipient of the Presidential Medal of Freedom, Edelman founded the Children’s Defense Fund and has worked tirelessly on behalf of disadvantaged children for many years. She held nothing back Thursday and quickly called her South-Central Pennsylvania audience to action. She repeatedly emphasized that we cannot be satisfied until all of America’s children are lifted out of poverty. Kids only get one childhood, Edelman explained, so we need to be moving with a sense of urgency.

So how do we do that? To put it in a few words, Edelman said good change is done in scuttwork, in the menial but manageable tasks necessary to meet pressing needs. We must be persistent, and cannot be afraid to be a little pushy in our pursuit of meaningful reform. We don’t have to be “big dogs,” to use Edelman’s term, gnawing off the heads of our nation’s problems, but instead we can be “fleas” who keep policymakers scratching until they’ve had enough.

History is painted with buzzing fleas who, in pursuit of a worthwhile cause, pestered and pushed dreams into realities. Suffragettes were fleas who bit and tormented until they got to vote. They marched, lobbied, wrote and rallied until it was easier for the government to comply with their wishes than to keep resisting their efforts.

The Civil Rights movement was full of fleas, too. One flea planted herself in a bus seat, and when she was forced to move others decided to walk to work in protest. Some fleas sat down at lunch counters even though they knew they wouldn’t be served. Nine more young fleas from Arkansas went to a school where they weren’t wanted. More than 200,000 fleas marched up to the Lincoln Memorial on a hot August day in 1963 to listen to Martin Luther King call for change.

Since the mass shooting at Marjory Stoneman Douglas High School last year a new swarm of fleas has emerged in the public eye. These fleas, fed up with recurring gun violence in American schools and seeking to make learning a safe endeavor for everyone, started a movement of their own.

Real change is rarely done by the “big dogs” who try to single-handedly tear down injustice, no matter how strong they are or how eloquently they speak; real change is done by the fleas who persist, band together, and don’t go away. Anyone can be a flea, Edelman urged her audience; if we follow the need with a united front, even the smallest of actions can lead to great change.