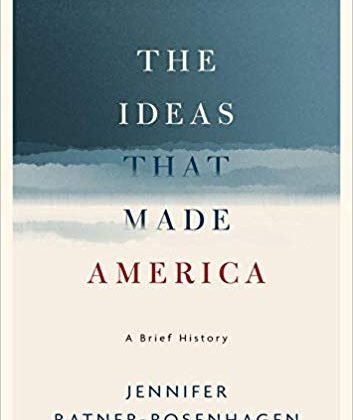 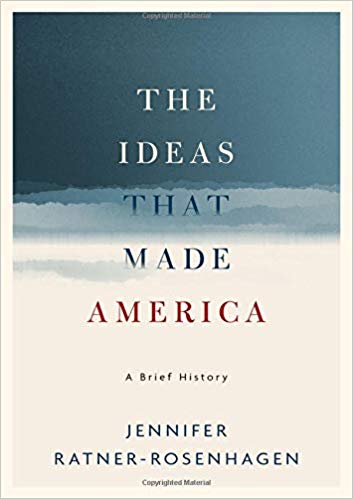 Jennifer Ratner-Rosenhagen is the Merle Curti Professor of History at the University of Wisconsin-Madison. This interview is based on her new book, The Ideas That Made America: A Brief History (Oxford University Press, 2019).

JF: What led you to write The Ideas That Made America: A Brief History?

JR: An editor at Oxford University Press approached me about writing a survey of American intellectual life for their popular Very Short Introductions series.  At first, I demurred, thinking that no intellectual historian in her right mind would try to sum up the entire sweep of American intellectual history from contact to the present in 35,ooo words (the length of their VSIs).   But this editor knows how to charm an author: all she had to do was dangle some of the superb VSIs in front of me to show me what’s possible with the form.  I came to see that this word limit on the grand narrative of American thought could, in fact be liberating for me as a writer and more enticing for a general reader.  So I agreed to try drafting a proposal, and doing that really drew me into the project.  I found myself writing sentences like “a historical consciousness is not only the core of our academic discipline but also the discipline of an educated citizenry” and really meaning it.  I came to really feel the urgency of a book that welcomed general readers into the beauty and messiness of the ideas that made the United States what it is today.

Apparently the editorial board of Oxford University Press felt the urgency, too.  They decided that they wanted me to write the book first as a freestanding trade book, which is now Ideas that Made America and then to eventually edit it down to be a VSI on American thought for their series.   And so this is my modest effort to imagine what intellectual history might look like were it to try to speak to general readers like my mailman, my political representatives, my children’s piano teacher, my hairdresser, and my mom.  I wanted to see if I could channel the energy and excitement of the history classroom onto the page.

JF: In two sentences, what is the argument of The Ideas That Made America: A Brief History?

JR: How about 2 words? Ideas Matter.

JF: Why should we read The Ideas That Made America: A Brief History?

JR: There is not a single major debate in contemporary American life—whether it’s about racial equality and racism, individual liberty and social obligation, or what it means to be an American—that hasn’t been debated, in some form or another, time and again, for centuries.  Current political questions (is government the source of or solution to our problems?), economic concerns (is there an invisible hand directing the market or rather the finger of the 1% tipping the scales?), and moral controversies (does a woman’s uterus belong to her or to God?) all have histories.  Putting current intellectual problems and commitments into longer historical perspective doesn’t minimize their felt urgency for us today, but it does allow us to keep company with generations of Americans who struggled with—and through—them in the past.

JR: I got drawn into American intellectual history—almost by accident– when I was a 19-year old undergraduate at the University of Rochester. At the time, I didn’t realize my good fortune of having stumbled into a course taught by one of the premier intellectual historians and cultural critics of the late ‘70s and ‘80s—Christopher Lasch (whose most influential work was his Culture of Narcissism [1979], an important book for President Jimmy Carter). Lasch got me hooked.  He was the one who first exposed me to the possibility of approaching the past by way of powerful ideas and intellectuals.  After that, I greedily took whatever courses I could with him and with another extraordinary American intellectual historian Robert Westbrook (who still teaches there today).  The two of them turned me from a student with zero interest in history into one who decided to make the study of it her life’s work.

Another way of putting this is to quote Ralph Waldo Emerson.  In “Circles” (1841), he wrote: “Beware when the great God lets loose a thinker on this planet.  Then all things are at risk. It is as when a conflagration has broken out in a great city, and no man knows what is safe, or where it will end.”  The same is true when the great God lets loose a masterful teacher in the classroom, and we wouldn’t want it any other way.

JR: My next book is on the ideas about—and quest for—“wisdom” in 20th-century American life. While it traces  different notions of wisdom and the means by which Americans sought it, the book also hopes to show that the study of history is itself a way to wisdom. According to Lord Acton: “History is not a burden on the memory but an illumination of the soul.”  I rather like this bit of wisdom.