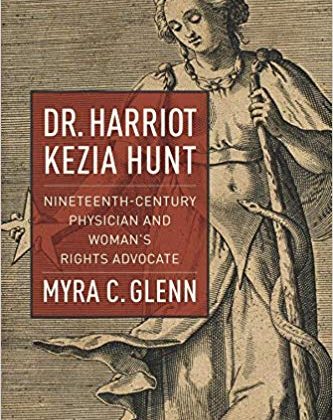 Myra Glenn is a Professor of American History at Elmira College. This interview is based on her new book, Dr. Harriot Kezia Hunt: Nineteenth-Century Physician and Woman’s Rights Advocate (University of Massachusetts Press, 2018).

MG: I was astonished that there was no book length monograph on a woman who was a pioneering female physician, health reformer, and woman’s rights advocate in nineteenth-century America. Once I began reading her 1856 autobiography Glances and Glimpses as well as her lectures and speeches I became fascinated with her and knew I had to be her biographer.

JF: In two sentences, what is the argument of Dr. Harriot Kezia Hunt: Nineteenth-Century Physician and Woman’s Rights Advocate?

MG: My book argues that Hunt warrants extensive study because she offers a rare, fascinating case study of how a single woman from a working-class Boston home became a successful professional and renowned reformer in nineteenth-century America. This text also uses Hunt’s richly detailed life narrative, Glances and Glimpses (1856), to explore how women described and interpreted their lives in antebellum autobiographies.

MG: My book examines Hunt’s establishment of a flourishing medical practice in Boston in the mid-1830s. Convinced that many of her patients’ physical maladies were rooted in their spiritual and mental anguish, Hunt became renowned for listening to women’s troubles, or “heart histories,” and counseling them. I also discuss Hunt’s unsuccessful efforts to attend lectures at Harvard’s medical school in 1847 and 1850 and her emergence as a leading woman’s rights advocate. She became the first woman in Massachusetts to publicly protest the injustice of taxing propertied women like herself while denying them the right to vote. Her annual petitions declaring “no taxation without representation” were widely reprinted in newspapers throughout the Northeast and Midwest. Hunt was also prominent in the annual woman’s rights conventions of the 1850s where she championed health reform, female doctors, higher education for women, and their enfranchisement.

Study of Hunt’s life also illuminates how religion promoted reform activism in antebellum America. I discuss how the Hunt family’s conversion to Universalism encouraged Harriot to challenge established gender roles and spurred her commitment to the woman’s rights struggle. I also explore how Hunt’s conversion to the ideas of the Swedish mystic Immanuel Swedenborg as well as her friendship with leading antebellum feminists, especially Sarah Grimké, led her to challenge patriarchal power within mainstream Protestant churches.

Finally, my book analyzes Hunt’s 1856 autobiography entitled Glances and Glimpses. At a time when few women wrote life narratives Hunt offered a richly detailed and revealing work. Her text was the first autobiography published by a leading antebellum feminist and also by a female physician.

MG: My father, a waiter in Brooklyn and immigrant from Cuba, was always a voracious reader of American history and instilled in me a love of both history and politics. Even when I was in high school I knew that I wanted to study how the past shapes our present and future.

MG: I plan to investigate how a group of leading antislavery and woman’s rights activists in antebellum America coped with old age and the challenges of facing illness, the death of loved ones, and their own mortality. This would be my fifth and probably last book.