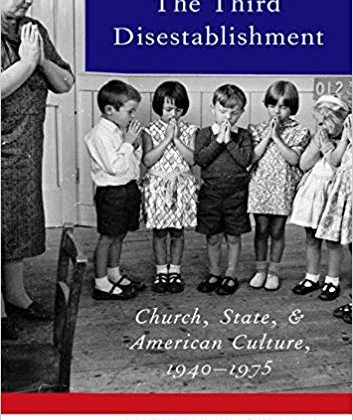 Steven Green is the Fred H. Paulus Professor of Law and Affiliated Professor of History and Religious Studies at Williamette University. This interview is based on his new book, The Third Disestablishment: Church, State, and American Culture, 1940-1975 (Oxford University Press, 2019).

JF: What led you to write The Third Disestablishment?

SG: Many things led me to write The Third Disestablishment.  I have written extensively about the ongoing dynamic of religious disestablishment in the 18th and 19th centuries.  My thesis has been (and continues to be) that there were various levels of disestablishment — political, institutional, legal, cultural — and that they occurred in incremental steps and at different times.  In essence, disestablishment was not perfected with the enactment of the 1st Amendment and, quite clearly, there was never a consensus on what it meant.  The Third Disestablishment brings this narrative forward to the mid-20th century where the Supreme Court formally embraced separation of church and state as the meaning of the Establishment Clause.  The book examines the cultural forces behind this embrace.  I felt that this was a story that had not been fully told before.

I also wrote the book in order to explore the background of the ongoing controversy over whether separation of church and state is/was the correct model.  The book also seeks to address why separationism arose, then fell into disfavor, at least as a legal principle.   Finally, on a personal level, in my earlier career as a 1st Amendment lawyer, I encountered several of the figures and organizations discussed in the book, though in their much later years.  This motivated me to examine the initial dynamic that led them to become involved in this issue.

JF: In two sentences, what is the argument of The Third Disestablishment?

SG: The book responds to more recent interpretations that maintain that separation of church and state became a legal and popular construct in mid-century due chiefly to residual Protestant suspicions of Catholicism.  It also maintains that even in its heyday, church-state separation was a contestable and indeterminate concept, and that its demise both legally and culturally began much earlier than has otherwise been maintained.

JF: Why do we need to read The Third Disestablishment?

SG: While numerous books have been written on the development of church and state, this book provides a fresh perspective by interweaving the cultural and legal developments of the period into  comprehensive narrative.  It examines the cultural backdrop to the Court’s adoption of its modern church-state jurisprudence.  It explores the roles of leading figures of the time, including Reinhold Niebuhr, John Courtney Murray, Paul Blanshard, Cardinal Francis Spellman, Billy Graham, Norman Vincent Peale, John F. Kennedy, and several consequential Supreme Court justices.

SG: I have been interested in the interaction between religion and politics/law in US history since undergraduate school.  I made the decision to enter a history PhD program after practicing law for 4 years.   Since then, I have had an amazing career that has allowed me to do legal advocacy, teaching, and scholarship in the area of religion, law, politics and history.

SG: I am writing a book for Cornell University Press in its religion in public life series on–you guessed it–the development of church-state separation in American history.