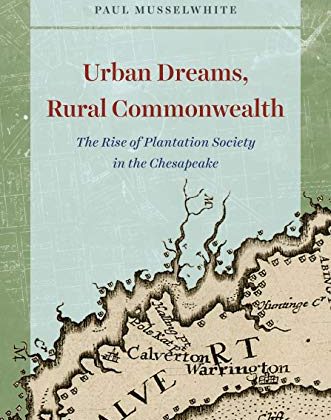 Paul Musselwhite is Assistant Professor of History and the Vice-Chair of the History Department at Dartmouth College. This interview is based on his new book Urban Dreams, Rural Commonwealth: The Rise of Plantation Society in the Chesapeake (University of Chicago Press, 2018).

JF: What led you to write Urban Dreams, Rural Commonwealth: The Rise of Plantation Society in the Chesapeake?

PM: As an undergraduate taking courses on medieval and early modern Europe, I became fascinated by the idea that towns and cities were miniature self-governing communes. In graduate school I decided to pursue early American history, but I wanted to know more about how that vision of the city shaped early colonialism beyond the archetypal New England town. Although I was in Virginia, I assumed that I would need to look elsewhere for examples because the scholarly literature was so adamant that the Chesapeake was completely rural. After a little digging, though, I was astonished to come across Robert Beverley Jr., the famous champion of Virginia’s early plantocracy, sponsoring an act in 1706 to establish incorporated self-governing towns across the colony, replete with guilds, markets, and provincial representation.

I quickly realized that this was the tip of the iceberg. Everywhere I looked through seventeenth-century Virginia and Maryland, people were talking about building towns—what it would achieve, how it should be done, and where others had gone wrong—and they were unmistakably drawing from the rich traditions of European chartered boroughs and self-governing cities. The Chesapeake’s rural character, which has largely been portrayed as a product of environmental determinism, suddenly appeared as an active choice made by a particular section of colonial society in response to these questions. I realized that in looking for towns, I had found some of the critical building blocks of rural plantation society.

JF: In two sentences, what is the argument of Urban Dreams, Rural Commonwealth: The Rise of Plantation Society in the Chesapeake?

PM: Our usual picture of the colonial Chesapeake is of a starkly rural society of tobacco and slavery that inhibited the development of towns and cities, but I reveal that urban development was actually one of the most hotly contested topics in the region throughout the seventeenth and eighteenth centuries. I argue that the absence of major urban places was not a product of plantation agriculture; rather, the relationship was quite the opposite, because decades of failed urban development were instrumental in forging the political structures and economic policies that facilitated big plantations in the Chesapeake and in shaping the agrarian outlook of the planter class in the new republic.

JF: Why do we need to read Urban Dreams, Rural Commonwealth: The Rise of Plantation Society in the Chesapeake?

PM: Urban Dreams will challenge the way you think about the development of the plantation system, early American urban places, and the roots of agrarian republicanism. For those interested in the relationship between slavery and the birth of capitalism, the book offers a new deep backstory, tracing the way large-scale plantations emerged in dialogue with the idea of the incorporated town just at the moment when the role of distinct urban civic communities in local market regulation was being co-opted and liberalized by the state. By exploring places that are traditionally overlooked in early American urban history, the book also argues that we have fundamentally misunderstood how contemporaries thought about cities and towns; it makes the case that urban history needs to pay closer attention to constitutional, legal, and ideological significance rather than simply counting populations or the volume of trade. Finally, Urban Dreams will also appeal to anyone interested in the roots of Jeffersonian agrarian republicanism. Historians have long searched for the reason why planters in the Chesapeake were particularly drawn to “country” ideology and classical republicanism, but they have never looked far enough back because they have mostly dismissed the seventeenth-century Chesapeake as a kind of “wild west” where pragmatism ruled. Civic republican ideas, though, were a critical part of debates over urban planning from the foundations of Jamestown, and the book uncovers planters’ gradual and conscious shift from viewing cities as the bastions of civic order to envisioning private plantations as the foundations of an agrarian republic.

PM: I’m an American historian because of the birth of online discount flight booking. When I was a teenager growing up in the UK, every summer my dad would scour very rudimentary websites for flights to corners of the US that didn’t normally attract British tourists, and then we would embark on mammoth road trips. That travel, especially around the South, introduced me to so many complex and contradictory facets of American society that as soon as I got to university, I signed up for early American history. From then on, I was hooked

PM: My new project, tentatively entitled Plantation: From Public Project to Private Enterprise, is a study of the long-noted but unexplored transformation in the meaning of “plantation” around the English empire during the seventeenth century. In the late sixteenth century, “plantation” in Ireland, Scotland, and America was predominantly understood as a process by which private individuals established new civic societies in conquered lands, but by 1700 it was widely recognized as a place of private commercial agriculture that pursued profit by exploiting enslaved laborers. The adaptation of “plantation” to describe this evolving socioeconomic system was conscious and highly significant; colonists engaged in particular forms of economic enterprise chose to call their estates “plantations” because the term allowed them to claim particular forms of authority within the imperial state and the commercial market. One particularly exciting part of this project involves building a database of the names given to plantations around the Atlantic world; I hope that tracking changing patterns in these naming practices will reveal shifts in the implicit assumptions about the social and economic structure of the plantation