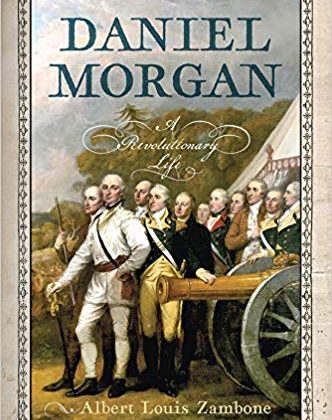 Albert Louis Zambone is an independent historian and writer.  This interview is based on his new book Daniel Morgan: A Revolutionary Life (Westholme Publishing, 2018).

JF: What led you to write Daniel Morgan: A Revolutionary Life?

b. However, this project was a delight rather than an assignment: As a child, the first American Revolution monograph I read was Don Higginbotham’s Daniel Morgan, Revolutionary Rifleman. Higginbotham so inspired me that I persuaded my mother to make me a hunting shirt so that I could be Daniel Morgan for Halloween. I was astonished to discover that no-one knew who Daniel Morgan was.

c. I’ve long wondered how a few people were able to rise in the status-conscious, hierarchical world of colonial Virginia. When the opportunity to write about Morgan arose, I realized that he was the perfect case study of social mobility in a relatively immobile and hierarchical society.

d. I’ve always been drawn to story, and Morgan’s life is by turns sprawling, romantic, tawdry, tragic, heroic, cinematic, operatic. Once I bit into it I couldn’t let go.

JF: In two sentences, what is the argument of Daniel Morgan: A Revolutionary Life?

JF: Why should we read Daniel Morgan: A Revolutionary Life?

AZ: First, it’s a good story, since it’s based on an interesting life. Second, as historians, biographies provide us with a “lab” for testing historical hypotheses. I think Morgan’s life gives us the opportunity to examine everything from the historical geography of the Shenandoah and the status theory of elites, to the radicalism of the Revolution and the eighteenth century market revolution.

AZ: Probably when I was about four years old, living in Greenwich, New Jersey, the colonial village a drawing of which decorates your blog. In Greenwich, the past remains a presence, and it captivated me. More importantly, my family encouraged my interest in history, and fed it with book after book. I can barely remember a time when I wasn’t fascinated by history of all kinds, especially the history of early America. Maybe when I was three or younger—as P.G. Wodehouse said, what I was doing before then, I don’t know, just loafing I suppose. Then, for many reasons, I was first trained as European medievalist, and then left it for the history of early America. It felt like coming home—though I think that training as medievalist is the best historical training that there is, as you must interrogate sources of all kinds, learn peculiar technical, and grapple with perspectives unusually different from your own.

AZ: My colleague Lendol Calder and I are working together on a project that uses his “uncoverage” model of teaching history and historical thinking to create a textbook of American history. Naturally we refer to it as the “untextbook.” After that, I hope to return to thinking about colonial elites in the early American South. I’d like to focus on a family, or several families, in part to explore the change in family life over a century and a half; their cultural inculcation; and their fashioning of the surrounding society, and how it fashioned them. In the meantime, I stay busy at work on my podcast Historically Thinking, found on iTunes and all the other usual places, having conversations interesting people about the fascinating nooks of the past, and how they think about them.