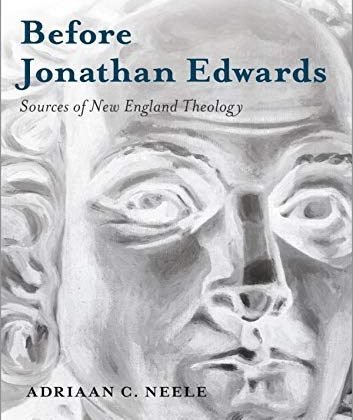 Adriaan Neele is the Director of the Doctoral Program and Professor of Historical Theology at Puritan Reformed Theological Seminary. This interview is based on his new book, Before Jonathan Edwards: Sources of New England Theology (Oxford University Press, 2019).

JF: What inspired you to write Before Jonathan Edwards: Sources of New England Theology?

AN: In Before Edwards I seek to balance the recent academic attention to the developments of intellectual history after Jonathan Edwards. On the one hand, the recent rise of Edwards scholarship and eminent reflections on Edwards’s “uniqueness” in American religious history, his Puritan sermon style and substance, and the appropriation of his thought in the courses of New England theology gave me to pause to offer another study on the preacher, theologian, and philosopher of Northampton. On the other hand, the rise of another scholarship—at the same, that on Protestant scholasticism and Reformed orthodoxy of the early modern era rarely coincides with studies on Edwards but offers consideration to re-assess and re-interpret Edwards’s theological relationship to the early modern era. The publication After Jonathan Edwards: The Courses of the New England Theology by Oliver D. Crisp and Douglas A. Sweeney— “a groundbreaking study of a neglected topic,” however, became a further stimulus to embark on a more comprehensive study of providing a broader background of Edwards’s use of Reformed orthodoxy and Protestant scholastic sources in the context of the challenges of his day. The longstanding trajectories of classical Christian theology are indispensable to discern continuities and discontinuities of his theological thought.

JF: In two sentences, what is the argument of Before Jonathan Edwards: Sources of New England Theology?

AN: The theological and philosophical sources of the early modern era have contributed to Edwards’ thought through his resourceful appropriation in biblical exegesis, formulation of doctrine, polemical response, and explication of practical aspects of Christian theology.

JF: Why should we read Before Jonathan Edwards: Sources of New England Theology?

AN: This volume will present the first comprehensive study of Jonathan Edwards’s use of Reformed orthodox and Protestant scholastic primary sources in the context of the challenges of orthodoxy in his day. It will look at the way he appreciated and appropriated Reformed orthodoxy, among other topics. The book studies three time periods in Edwards’s life and work, the formative years of 1703–1725, the Northampton period of 1726–1750, and the final years of 1751–1758. A background of post-Reformation or early modern thought, but with particular attention to Petrus van Mastricht (1630-1706)—Edwards most “favored” theologian, is offered for each period enabling readers to assess issues of continuity and discontinuity, development and change in Edwards. Since there has been limited research on Edwards’s use of his primary sources this study analyses the theological ideas of the past that found their way into Edwards’s own theological reflections. The book argues that the formation, reflection, and communication of theological thought must be historically informed. The teaching, preaching, and practice of theology must be rooted in the classical curricula, methods of preaching, and systema of theology. Inherited theology must be evaluated on its own terms, historically and theologically, so that meaningful answers for the present can be constructed. Tracing Edwards’s discerning engagement with past ideas exemplifies how theology unfolds in an era of intellectual, religious, social, and political transition.

AN: My training in Protestant scholasticism, Reformed orthodoxy and concentration in the early modern era of ca. 1565 – 1750, and my work at the Jonathan Edwards Center at Yale University offered an opportunity to examine the writings of the sage of Northampton, and situates Edwards in a world more European, classical, and biblical-theological than the one taken for granted by most of his interpreters.

Chapter: The Reception of Jonathan Edwards in Africa (OUP, 2020)

Book: The Reception of Medieval Rabbinic exegesis in Reformed Orthodoxy (2020)

Chapter: The Reception of Jonathan Edwards in the Netherlands (Palgrave, Macmillan, 2020)