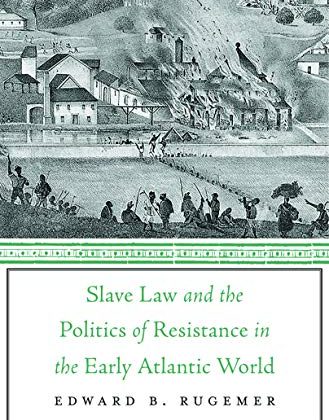 Edward Rugemer is an Associate Professor of African American Studies and History at Yale University. This interview is based on his new book Slave Law and the Politics of Resistance in the Early Atlantic World (Harvard University Press, 2018).

JF: What led you to write Slave Law and the Politics of Resistance in the Early Atlantic World?

ER: When I was in graduate school at Boston College, both Ira Berlin’s Many Thousands Gone and Philip Morgan’s Slave Counterpoint were published during the years before my oral exams. I read both and was inspired to take on a comparative project, though not, I was advised, for my dissertation. The idea for the comparison at the heart of this book came from my dissertation/ first book, The Problem of Emancipation: The Caribbean Roots of the American Civil War (Louisiana State University Press, 2008). I realized in writing that book that the planter classes in Jamaica and South Carolina had this very similar relationship with abolitionists. They were the most radically pro-slavery in these different regions of the Anglo Atlantic, the U.S. South and the British Caribbean. When I considered this realization alongside the work of Richard Dunn and Peter Wood, that both Jamaica and South Carolina were “colonies” of Barbados (to use Wood’s phrase), I saw that these two slave societies had followed very similar historical arcs. They had common origins, developed into the wealthiest colonies of their respective regions, and though each went its separate way during the American Revolution, both followed a very similar pattern in the aftermath of the Haitian Revolution and the emergence of radical abolitionism. Comparison requires both similarity and difference and the political histories of Jamaica and South Carolina have the necessary mix.

The central theme of the book — the relationship between slave resistance and broader political changes — also came from the first book, specifically in the first few chapters. I felt there was much more to say about the impact of slave resistance upon the political history of slave societies. Some of this work had been done by historians of the American Civil War era such as Jim Oakes and Steve Hahn, and historians of the nineteenth century Caribbean such as Mary Turner and Emilia Viotti da Costa, and more recently Gelien Matthews and Claudius Fergus. But no one had gone deeper into the colonial period and I thought it was important to do so.

JF: In two sentences, what is the argument of Slave Law and the Politics of Resistance in the Early Atlantic World?

ER: Very early in the history of Atlantic slave societies a political dialectic developed between Africans who forcefully resisted enslavement, and slaveholding colonists who sought to impose the rigid social control they saw as necessary for profitable colonial enterprise. This dialectic is evident in slave law, it developed and changed until the abolition of slavery, and it shaped the histories of Jamaica and South Carolina in fundamentally different ways.

JF: Why do we need to read Slave Law and the Politics of Resistance in the Early Atlantic World?

ER: First, it is a valuable account of, and explanation for, the political significance of slave resistance in Anglo-Atlantic slave societies from their origins to the 1830s. Secondly, the book makes clear the differences between the slave regimes of the Caribbean and the U.S. In this way it complements Richard Dunn’s important study, A Tale of Two Plantations

ER: I worked as a Jesuit volunteer teaching high school in Kingston, Jamaica, from 1994-1996 and my experience there led me to some deep reading in the history of slavery and eventually graduate school.

ER: I have two different projects that are in the early stages. I am thinking about writing a synthesis of slavery in the Western World. My most ambitious self wants to start with some of the theories on the origins of slavery, move into ancient Greece and Rome, the decline of slavery in Western Europe and its persistence in the Mediterranean, the expansion into the Atlantic. But I want to take this history up to modern slavery and human trafficking in our own time. I don’t think we have an historical narrative that integrates the racial slavery of the Atlantic World, which lasted for generations and has had such insidious afterlives, with the various forms of slavery that persist today. Many modern day abolitionists invoke the abolitionist movements of the past without careful attention to the distinctions between these manifestations of slavery across time and space. Historians need to do this. So I’d like to come up with a synthesis that brings this history together.

The second idea is a deeply archival project about a slaveholder we know very little about. His name is Charles Douglas and the Beinecke Library has about 30 years of his correspondence with his brother Patrick. I read it all during my first year at Yale, thinking I would use it for this book, but I only used one brief quote. Douglas moves from Ayr, Scotland to Jamaica when he was a teenager. He mostly worked as a bookkeeper at first (kind of an assistant overseer), but he does accrue some wealth and becomes a slaveholder. What’s curious about him is that when he buys land, he buys land that directly abuts Moore Town in the Blue Mountains, which is one of the Maroon Towns. He becomes the superintendent for the Moore Town Maroons, which is a position established by the 1739 treaties that ended the first Maroon War and recognized Maroon autonomy within the colony. Formally, he was the Maroons’ military commander, but in fact I don’t think it worked that way. Yet there were these superintendents, one for each of the towns, and they were well paid by the colonial state. But there is an archival challenge: I need to find his reports. I don’t know where they are and no one has ever referenced them. And if I can find them, it could be a really interesting book. I need to dig deeper and I love that challenge, but it will take some time.