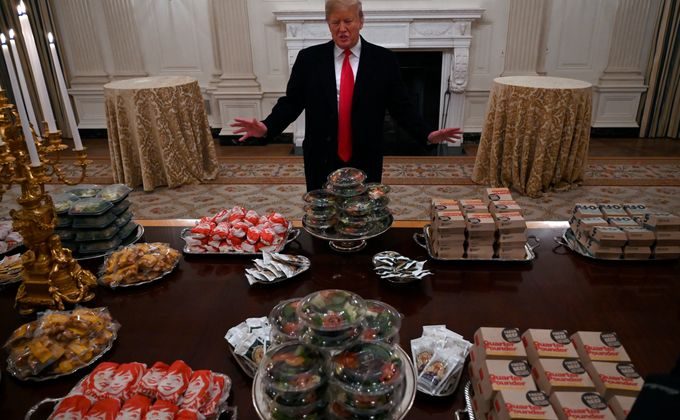 Writing at The Atlantic, Megan Garber suggests that Trump’s fast food dinner with the Clemson University football team was a masterful political move.  Here is a taste of her piece:

This was a thoroughly Trumpian strain of spectacle, its images meant to hijack attention and go viral. The president invited members of the press into the State Dining Room on Monday, before the diners were invited in, to take photos and shoot video of the tablescape, rendering an otherwise ordinary White House event—a victorious athletic team, rewarded with a presidential visit—into something remarkable. And the feast that ensued (“great American food,” Trump called it), was the distillation of some of his fondest visions of the country: corporate, homogeneous, teasing, unapologetic, and revolving, above all, around the whims of Donald Trump. Images of the president, presiding over piles of cardboard-boxed burgers, quickly attained their virality; there was pretty much no way for them not to. Trump bragged like so about his own role in the procuring of these postmodern loaves and fishes: “Because of the Shutdown I served them massive amounts of Fast Food (I paid), over 1000 hamburgers etc. Within one hour, it was all gone. Great guys and big eaters!”

A dinner of champions, with only one winner: The event was thus very little about the Clemson Tigers, whose fate, on Monday evening, was to dine on lukewarm Whoppers, and very much about the man who hosted them. The leader, that leader wants you to know, MacGyvered some McDonald’s, and in that fact is an argument not just about the powers of the one politician, but also about the limits of the others. The pragmatic reason for the McMeal, as the president noted, was the partial government shutdown, which Trump himself initiated, and which he refuses to end, and which has resulted in, among many other things, the reduction of staffers at the White House who might traditionally prepare a sumptuous feast for visiting dignitaries. (Adding to the limitations: a snowstorm in Washington, D.C., that kept even some non-furloughed workers homebound on Monday.)

The broader implications of the meal, though, are philosophical. Lurking at the edges of the shutdown—wrapped, along with Wendy, around those rows of wilted burgers—are deeper questions about what government ultimately is for, and about what government can truly accomplish on behalf of a vast and hectic nation. Trump’s feast was in that sense also an argument, one that aligns him, to an unusual degree, with the most conservative elements of the party he is steadily remaking in his own image: Government, all those neat lines of Big Macs insist, isn’t as important as some Americans have assumed it to be. Institutions, staffs, committed teams striving on behalf of the country: overrated. The government is shut down, and yet the Filets-O-Fish appeared nonetheless, each one alleging that, shutdown or no, the people shall have their feast. A McChicken in every pot.