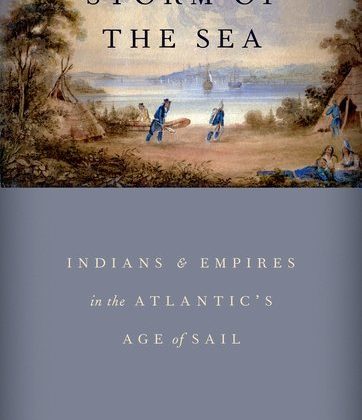 Matthew Bahar is an As sistant Professor of History at Oberlin College. This interview is based on his new book Storm of the Sea: Indians and Empires in the Atlantic’s Age of Sail (Oxford University Press, 2018).

JF: What led you to write Storm of the Sea: Indians and Empires in the Atlantic’s Age of Sail?

MB: The book emerged from my interest in two of early American history’s most dynamic subfields, Atlantic and American Indian history. When I began to conceptualize this project, practitioners of each didn’t have much to say to one another; Atlanticists saw Indians as terrestrial people and Native Americanists viewed the Atlantic World as a fundamentally European space. I wanted to write a book that explored one principal question: what happens to the “Atlantic World” when we add Indians to it? The answer readers confront as they move through the narrative might surprise them as much as it did me.

The colonial-era Wabanaki seemed like a good case study to explore this question. They’re among the few Native groups in the east who have remained on their ancestral lands near the ocean up to the present. I aimed to figure out why. As I did, I discovered an incredible story that hasn’t received the appreciation it deserves.

JF: In two sentences, what is the argument of Storm of the Sea: Indians and Empires in the Atlantic’s Age of Sail?

MB: In the two centuries after Europeans first arrived in the American Northeast, the Wabanaki Confederacy coalesced around an expansionist and extractive political project designed to establish dominion over the sea and shore of northern New England and French Acadia. Their appropriation and assimilation of sailing technology proved essential to its fortunes.

JF: Why do we need to read Storm of the Sea: Indians and Empires in the Atlantic’s Age of Sail?

MB: It positions Indians where we’re not accustomed to seeing them – aboard prize ships, scrambling up the rigging, working sails, and commanding the helm. We expect to see Europeans there. But readers will quickly encounter them elsewhere, in places and postures equally unexpected.

History books often adopt a narrative trajectory of declension or progress. This is especially true in Native American history. Protagonists and antagonists in these sorts of stories are easy to identity. Storm of the Sea aims to eschew this. I hope readers instead find a more human narrative that recalls the profound contingency of life in colonial America, as the actors themselves would’ve experienced it.

MB: I decided on this profession while working for a couple years in an unrelated field after my undergraduate degree. Looking back, I’m glad I spent time outside academia because it gave me the time and space to reflect intentionally on my past learning and future goals. Moving away from the intellectual community of my college years allowed me to cultivate a better appreciation for the spirit of discovery that’s so central to our experiences in the classroom, library, and archive.

I became an American historian in graduate school because America’s indigenous past had captivated me for many years. I grew up very close to an Indian reservation and in some ways encountered Indians the way many American colonists did: often and everywhere. They were people with whom you interacted every day in a variety of contexts, some amicable and others fraught, and their presence seemed as natural and permanent as everyone else’s in the community. As I studied the history of white-Indian relations, I began to appreciate the distinctiveness of the colonial period and of my own lived experience.

MB: I’m working on a book-length study of shipwrecks in colonial America. Several of the themes central to Storm of the Sea, such as Native and colonial political economies, catastrophe and misery, gender roles, imperialism, and maritime violence, are shaping my inquiry into this strikingly common transportation disaster in the early modern period. The book will ultimately conceptualize shipwrecks as both destructive and generative experiences for Natives and newcomers alike, politically, socially, and economically.