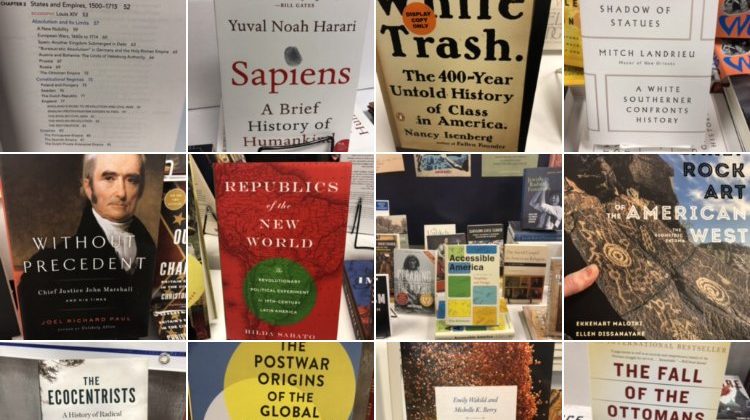 Megan Jones of The Pingry School offers one more post from the floor of the annual meeting of the American Historical Association in Chicago.  In this post, Megan reflects on her last day of the conference with a nod to the book exhibit and a panel on visual culture and the end of World War II. (Read all of Megan’s posts here).  Enjoy!  –JF

The book exhibit is one of the best parts of an academic conference, particularly for someone who does not have the time to keep up with book reviews in academic journals. A scholar browsing the exhibit hall for new titles is like a child perusing a candy store, and the feeling of ecstatic curiosity is probably about the same. Kevin Gannon (@TheTattooedProf) had a great GIF of the wizard from Disney’s “Fantasia” to represent his analysis of historians in book exhibits. I spent about two hours walking through the hall. Here’s a screenshot of my camera roll showing the books I found particularly appealing: I’m going to (hopefully) be teaching a course on American environmentalism, Atlantic World and modern European revolutions, and Modern World History in the future, so my selection is fairly broad. I even persuaded a few publishing reps to send me free samples. Score.

The best panel I attended on Day 3 was session #173, “Visualizing Victory, Visualizing Defeat: The Material Culture of Occupation in the Wake of World War II.” Two PhD candidates at the University of Wisconsin-Madison gave fascinating talks on the afterlives of visual artifacts in the postwar period. Abigail Lewis discussed the various uses and changing meaning of photographs taken by French photographers during the Vichy regime. These images depicted a relatively happy and peaceful France under Nazi occupation, which can be best explained by the fact that only photographers who agreed to abide by Nazi rules could obtain material with which to actually shoot photos. These images were used after the end of WWII to depict occupation in a blockbuster show at the Grand Palais in 1946, and also during a 2008 retrospective.  Jennifer Gramer spoke about German war art and the confiscation of such work by the American Captain Gordon Gilkey with the Roberts Commission, and the choices made to determine which art was deemed potentially capable of inciting violence in the future.

Both Lewis and Gramer discussed how the images and works they studied had different meaning for the French and Germans depending on the time under consideration. Both also questioned how the meaning of images changes depending on the context – should we look at an image divorced from its historical context and deem it “artistic” as in the case of German war art, some of which is objectively beautiful and clearly drawn by a talented artist? Do the images taken by French photographers indicate their complicity with the Vichy regime, or were they subversively collaborating with the idea that their images would serve as a documentary record for posterity? Who gets to determine the meaning of an image? The questions Lewis and Gramer posed, which I am probably doing no justice to, speak to a broader question of who owns history and who has the right to interpret historical artifacts.