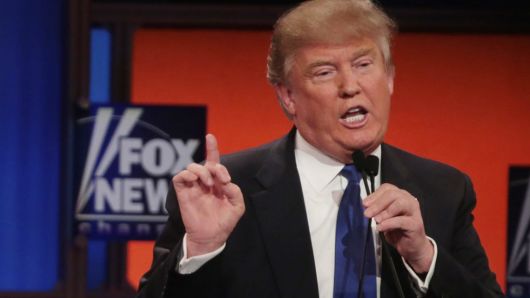 Matt Lakemacher of Woodland Middle School in Gurnee, IL reports on a very relevant panel held at the annual meeting of the American Historical Association.  You can read all his posts here. Enjoy! –JF

This afternoon’s AHA19 panel, “Unfaking the News: Historians in the Media in the Age of Trump,” was a lively and much needed discussion on the role that historians can and should play in bringing their scholarship to the general public through mass media.  It was by far the most political session I’ve attended, but it’s hard to envision how that could have been avoided, considering the session’s namesake politician’s evident lack of historical understanding and (according to the Washington Post just two months ago) average of five false or misleading claims per day since becoming president.

The format was round-robin and each round of discussion was started with a question posed by session chair Kenneth Osgood.  This allowed for plenty of back and forth from the panelists and a good deal of follow-up questions and commentary from the audience.  What follows are two of the questions asked, with a summary of the responses from the historians on the panel.

1)  What’s an issue facing the country that cries out for meaningful historical understanding?

Nicole Hemmer – “The crisis of political journalism in the Age of Trump.”  According to Hemmer, the values of objective reporting have come under fire and the solution of some to just offer both sides has led to false equivalencies being created and unchallenged notions being promoted on the air and in print.

Jeremi Suri – “The bureaucracy (the ‘Deep State’).”  Despite its demonization, and view by some during the current government shutdown that it’s even unnecessary, Suri explained how bureaucracy is a good thing.  It makes our lives better and we need it.  At a conference with attendees from all over the country, his example of the air traffic controllers who are currently working without pay had easy resonance.

Julian Zelizer – “Partisanship and polarization … we need to understand just how deeply rooted this disfunction is or we’ll always be waking up like we’re Alice in Wonderland.”

Jeffrey Engel – “How much do we need to be educators, how much do we need to be citizens, and how do those responsibilities overlap?”  He continued, tongue in cheek, “When Trump sends that next tweet, we need to be able to step in and say, ‘well no, John Adams also tweeted that.’”  In some of the more sobering analysis from the panel, Engel admitted that over the past two years he has genuinely started to think that the Republic is in danger.  “What does the history we are talking about mean to us today?” he asked.  “These are unusual times.”

2)  Is Donald Trump just saying out loud what other presidents have thought in quiet?  Is the Trump Presidency unprecedented?

Hemmer – “The ‘just saying it out loud’ is important … that matters.”

Zelizer – The unusual question we’re continuing to see played out is, “how far to the brink is the party of the president willing to go in support of their president?”

Engel – “Abraham Lincoln’s most recent thoughts didn’t immediately pop up on your phone.”  He continued, “If any other president had admitted to having an extramarital affair with a porn star, their world would have exploded.  It’s important to know just how far we have, and how far we have not, come in the last two years.”  Engel explained that never in the discussion of Stormy Daniels was anyone seriously questioning whether it happened.  The debate was always over whether it was illegal.  And for him, that’s a shocking development.  He also cautioned that historians have to be careful with how they use the word “unprecedented.”

Suri – “We need to move people away from the false use of history.”  For him, the word unprecedented means “beyond the pale for the context that we are in and the trajectory we’ve been on.”  He stressed that historians need to push back against the impulse to say that “everything is Hitler,” just as much as they need to push back against the narrative that “everything is normal.”

Osgood had opened the session with the observation that “these challenges were not invented by Donald Trump, but they have been exacerbated by him.”  Towards the end of the panel he added that for Trump, “Twitter is the source of his power.”  With that in mind, perhaps it’s a good thing that Kevin Kruse, Kevin Levin, the Tattooed Prof, and other so-called “twitterstorians” are practicing public history online and on the air.