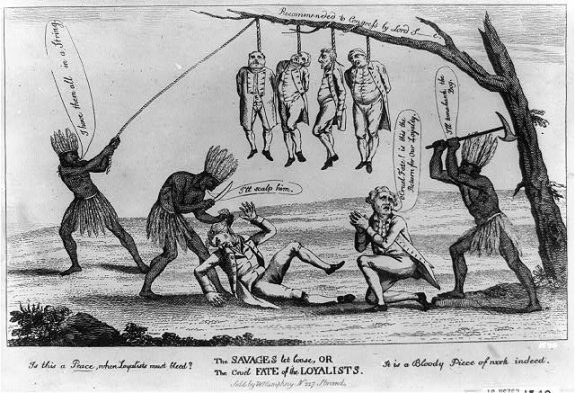 Matt Lakemacher of Woodland Middle School on Gurnee, IL is doing yeoman’s work from the floor of the annual meeting of the American Historical Association in Chicago.  Here is latest.  Enjoy!  (Read all of Matt’s posts here).  –JF

I wrote a research paper last semester on the ways in which evangelical women used religion to interpret and defend the American Revolution.  I included a section on Phillis Wheatley, but rather than rekindle the debate here over whether or not she was an evangelical, I’ll save that for my post on Saturday’s session, “Who is Evangelical?  Confronting Race in American Christianity.”  The original plan for my paper had been to include Loyalist women, whose evangelical faith led them to the opposite position, but space and time constraints forced me to narrow my focus to Patriots only.  Thus, I was thrilled to see two sessions titled “Loyalism in the Age of the Atlantic Revolutions” on the agenda today at AHA19.  Both sessions were arranged by AHA President Mary Beth Norton.

I’d be remiss at this point to not put a plug in for my graduate program, which is offered through the Gilder Lehrman Institute of American History, in cooperation with Pace University.  The program offers K-12 history teachers, such as myself, the chance to earn an MA in American History online for a fraction of the cost of most graduate programs, and best of all, the lectures are all led by preeminent historians in their respective fields.  The professor of my course last semester on women and the American Revolution was none other than Carol Berkin, who chaired the second session today on new research.

Timothy Compeau started that session off with his paper “Retributive Justice? Loyalist Revenge and Honorable Manhood in the American Revolution.”  It offered a fascinating look at the ways in which Christian virtue and masculine honor culture were in conflict during the Revolutionary Era and how this acutely affected Loyalist men.  According to Compeau, these men provide an excellent window into studying that culture.  He pointed out how Patriots specifically attacked the manhood of Loyalist men, such as when Alexander Hamilton claimed that Samuel Seabury was impotent or when Thomas Paine wrote that Tories were unfit to be husbands or fathers.  He also explained how due to the war, Loyalist men were limited in the ways that they could respond to such questions of honor.  Many chose Christian responses of forgiveness and restraint, out of necessity if not desire.  But some did find ways to square the use of retributive violence with their Christian faith.  In the end, many Loyalist men were able to claim that their choice had been the more masculine one, as it took greater manhood than the Patriots had to suffer all the indignities that were forced upon them.  As Compeau succinctly put it, “by defending the Crown, loyal men gained nothing put honor.”

Elite, white, Loyalist women of the Delaware River Valley were the focus of Kacy Tillman’s paper and she brought up names that were familiar from my own research, such as Grace Growden Galloway and Elizabeth Drinker.  Tillman sought to parse some of the differences among such Loyalist women.  Some were what she called active Loyalists, others were passive Loyalists.  Some assumed the label while others had it attached to them.  And many of them were Loyalist by association, be it familial, religious, or both.  Tillman’s thesis was that all of these women faced violations of their bodies and their writings (“stripped and script,” as the title of her paper aptly put it) as a result of their Loyalism.  One of the things she noticed in her research was that one can learn just as much from what these women didn’t write than what they did.  Perhaps that’s why I had such difficultly using those sources for my own paper.  “It’s hard to read for silence,” Tillman said.  “But we have to be able to do so when reading the letters of Loyalist women.”

James Sidbury rounded out the session with some words of reassurance related to my own experience in researching Loyalists.  He started off his talk by defending the truism that history is often written by the winners, but then qualified that observation.  “There’s been a whole lot written about the Revolution,” he said.  “It’s inevitable that something is going to be written about [Loyalists].”  His paper focused on the Black Loyalists from Nova Scotia who helped found the colony of Freetown in Sierra Leone.  Those colonists, while remaining loyal to the British Crown, led an uprising against the company that ran the colony and attempted to create an autonomous enclave within the colony by using many of the Enlightenment ideals of rights and governance they had learned in Anglo-America.  As Sidbury’s talk made clear, despite the Nova Scotians’ embrace of some American ideals, the new United States explicitly excluded non-whites from political participation.  Thus, it makes sense that monarchical government still held much ideological appeal for Black Loyalists in the Age of Atlantic Revolutions.