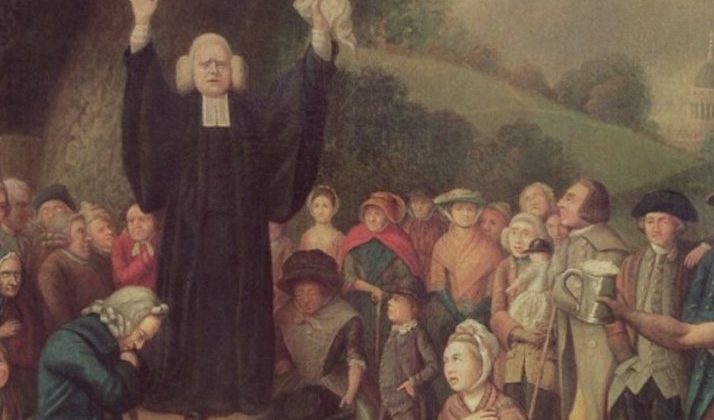 (This is the second post in a series on the word “evangelical” in the eighteenth-century and today).

In my first post in this three-post series, I made the case that there was a religious movement in the eighteenth-century that can be identified as “evangelical.”  Of course I could never make this case in just one blog post, so I cited several prominent scholars who have made the case in a much more thorough way.

I also noted in that post that the word “evangelical” is a contested term.  Today there are historians who believe that doctrine, theology, or spirituality is not the best way to define the word.  In other words, these scholars believe that the “evangelical” movement in America (and elsewhere?)  is really about something other than religious experience.  It is really about white supremacy, patriarchy, capitalism or nationalism (at least primarily).

Gloege argues that there are many manifestations of Christianity, (and even non-Christian religions) that affirm Bebbington’s four points.  If this is true, he asks, what makes the Bebbington Quadrilateral unique to evangelical religion? (“Muslims convert too,” he writes).  Writing in the context of evangelical support for Donald Trump, Gloege believes that anyone who uses the Bebbington Quadrilateral to define what it means to be “evangelical” is trying to advance an “agenda.” In this case, he casts his net widely.  Those who believe that the Bebbington Quadrilateral is a useful interpretive tool are ignoring the fact that being “evangelical” has less to do with one’s sincerely held religious beliefs and more to do with racism, patriarchy, free-market capitalism, or the policing of sexual ethics.  (I responded to this piece, in the context of present-day evangelicalism, here).

I am not sure if Gloege would say that the Bebbington Quadrilateral is useful for understanding 18th-century evangelicals.  His piece in Religion Dispatches seems to be mostly concerned with twentieth and twenty-first century evangelicals.  (Gloege’s wrote his dissertation and book on Moody Bible Institute). If he does not find the Bebbington Quadrilateral useful to interpret the evangelical movement in the 18th century, he is not alone.  Many historians of the period agree with him, but for very different reasons.

In my last post, I noted that some eighteenth-century historians, including Doug Winiarski, believe that the Bebbington Quadrilateral does not go far enough in defining 18th-century evangelical religion.  But rather than seeing the 18th-century evangelical movement as a guise for racism, patriarchy, or something else, Winiarski thinks Bebbington’s category of “conversionism” is too “flat.”  He thinks that evangelicals in early New England were defined by a spiritually powerful experience of the New Birth that transformed their lives in profound ways–a type of conversion that was much more radical, Holy Spirit-empowered, and instantaneous than the old Puritan “morphology of conversion.”  Thomas Kidd makes a similar argument in his history of the First Great Awakening.  If Gloege wants to apply his Religion Dispatches argument to the 18th-century (and, again, I am not sure he does), he is going to have to engage with these historians and others.

In my view,  the eighteenth-century evangelical movement must be defined primarily by the born-again experience (as Jesus taught in the Bible, as centered on the cross, and as an impetus for evangelism, missionary work, and social justice). This, it seems, is the only way to distinguish someone associated with the evangelical movement from someone who was not.

Gloege says that “a definition should connect to a movement’s most salient features (what sets it apart).”  Agreed.  Were 18th-century evangelicals patriarchal, racist (by today’s definition), entrepreneurial, etc.?  Of course they were.  So were most other 18th-century British-Americans:  Old Lights, Old Sides, Deists, continental Protestants (Lutherans, Huguenots, Dutch Reformed), Catholics, Jews, etc….  Even the Quakers, if recent historiography is correct, were a bunch of wealth-seeking slave-holders who “prayed for their enemies” on Sunday and “preyed on their enemies” during the rest of the week.  I am not suggesting that we should ignore these darker dimensions of eighteenth-century life, but none of them really make evangelicals unique or set them apart from the rest of British provincial culture.  But their religious beliefs do set them apart.  And most people living in the 18th century also believed that the religious beliefs and spiritual practices of evangelicals set them apart.

Another scholar who wants to suggest that “evangelical” is more than a spiritual term is Calvin College historian Kristen Kobes Du Mez.

Obvious to you and me. Not obvious to those who don’t know the history/historiography. Merritt knows enough of that history, so he should know better. Not trying to defend his sloppy attack. But many of us have been contesting a (primarily) doctrinal definition.

I embedded this tweet for its final sentence.  Du Mez notes that she is part of a group (“us”) who have been “contesting a (primarily) doctrinal definition” of evangelical religion.  Gloege is part of that group.

In a piece at The Anxious Bench blog, Du Mez historicizes the term “evangelical” in a way Gloege does not..  She writes (along with her co-author Hannah Butler):

Thinking of evangelicalism as a historical and a cultural movement invites closer scrutiny to the centrality of racial identity, patriarchal power, and Christian nationalism in shaping the contours of the movement, and to the politicization of American evangelicalism that has occurred over the past half century.

It’s important to realize that this isn’t the first time “evangelicalism” has been a topic of public conversation. And it’s not the first time that the term has been reinvented. In fact, linguistic analysis reveals multiple shifts in meaning, and these shifts often correlate with spikes in public usage. In other words, people talk about evangelicalism more when its meaning is shifting. (Or, the more people talk about evangelicalism, the more its meaning can shift).

According to the Oxford English Dictionary, the term emerged in Germany and Switzerland as a way to distinguish the Lutheran from the “Reformed,” or Calvinist church. In Germany, “evangelical” came to signify Lutheranism specifically, or Protestantism more generally. Circa 1537, the OED reports that “evangelical” also began to signify being “characteristic of the Gospel dispensation,” and did so until 1875. During the 18th century, “evangelical” also came to specify a particular doctrine of salvation by faith, a definition continuing into the 1890s.

Looking to American history, one can observe shifts in the meaning of the term “evangelical” through corpus analysis, the study of linguistic phenomena through analysis of language corpora, or collections of words.

Again, if we examine evangelical religion historically, should we conclude that it has always been a movement defined primarily by “racial identity, patriarchal power, and Christian nationalism”?  Are these the things that “set evangelicals apart,” to use Gloege’s phrase?  How do we distinguish an 18th-century evangelical from everyone else in the century who believed in white supremacy, patriarchal power, and Christian (British) nationalism?

Once we establish that 18th-century evangelical religion was defined primarily by a belief in the new birth and the spiritual power associated with such an experience, then we can move to a debate over historical continuity.  In other words, we can then advance to a discussion about whether or not the new birth and the life-transforming faith that millions of people claim to have experienced is what defines (primarily) an evangelical today (or in the 19th century or in the 20th century).  A lot of early American historians who study the eighteenth-century, whether they have a stake in twenty-first century religious debates or not, have suggested that such continuity does exist.  For example, Winiarski writes :

Incited by Whitefield and fascinated by miraculous gifts of the Holy Spirit–visions, bodily fits, and sudden conversions–countless New Englanders broke ranks with family, neighbors, and ministers who dismissed their religious experiences as delusive enthusiasm. These new converts, the progenitors of today’s evangelical movement, bitterly assaulted the Congregational establishment.

But, of course, this does not mean, as Du Mez notes, that we historians should not also be concerned with change over time.

Finally, these attempts to define evangelical religion as something other than a deep spiritual commitment to an instantaneous and radical new birth remind me of the argument American religious historians have been waging for a long time about the necessity of treating religious belief as a legitimate category of analysis rather than as a guise for something else.

The First Great Awakening, and the larger evangelical movement, as understood in its 18th-century context, was a ultimately a religious movement–a movement about spiritual experience informed by an encounter with God through the new birth.  This encounter, many believed, had the potential to transform a person’s life and launch it in a new direction characterized by service to Jesus Christ.  When historians make it primarily about something else–the coming of the American Revolution, a manifestation of racism and patriarchy, an example of consumer culture–they miss what the movement meant to its participants and they undermine spiritual belief and lived religion as a legitimate category of analysis.

So why am I making such a big deal about how to define 18th-century evangelicals?  Because I will address this question in my next post in the context of the fallout from the Kidd-Merritt debate and the role I played in it.  And yes, Phillis Wheatley will be mentioned!  🙂