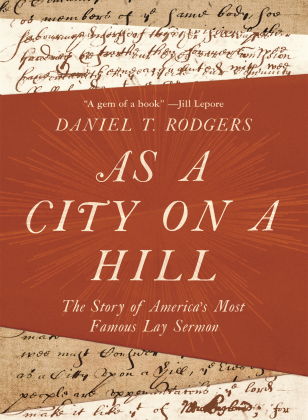 We are working hard to get Princeton University historian Daniel Rodgers on the podcast.  He is the author of  As a City Upon a Hill: The Story of America’s Most Famous Lay Sermon.  (He will be featured on the Author’s Corner very soon).  In the meantime, here is a taste of an excerpt from the book published at the Los Angeles Review of Books:

WAS AMERICA BORN capitalist? it is often asked. Ever since Max Weber proposed a causal relationship between early Protestants’ longing for order and rational control and the spirit of modern capitalism, the question has consumed the attention of generations of sociologists and historians. Weber’s ideal types were too abstract, it is now clear. The careful accounting and control of the self that the Puritans so conspicuously valued was only one of the cultural traits on which capitalist economies have thrived. Others, like the risk-taking and labor exploitation on which the tobacco and slave economy of early Virginia was founded, could be successfully capital-generative as well. Capitalism’s identifying features lie as much in its institutions of trade, property law, and labor as in the inner ethos that captured Weber’s imagination.

Measured in these ways, there can be no doubt that Puritan New England was a by-product of capitalism in its expansive, early modern phase. John Winthrop’s settlement arose within one of the great commercial empires of the early modern world. Unlike the Spanish conquest a century earlier, in which arms, expropriation of easily obtained wealth, and missionary zeal took the vanguard roles, the English colonization of the Americas was a merchants’ endeavor. Trading corporations — the Virginia Company, the Massachusetts Bay Company, the Providence Island Company, the Plymouth Company — undertook the work of settlement throughout British America, capitalized by investors’ purchase of their joint stock.