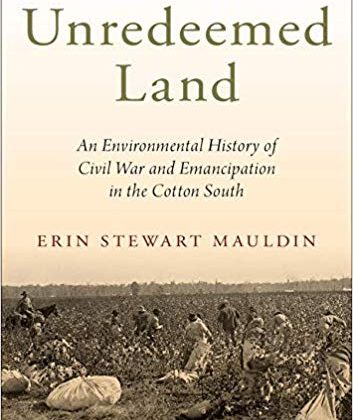 Erin Mauldin is an assistant professor of History and Politics at the University of South Florida St. Petersburg. This interview is based on her new book Unredeemed Land: An Environmental History of Civil War and Emancipation in the Cotton South (Oxford University Press, 2018).

JF: What led you to write Unredeemed Land?

EM: While reading Eric Foner’s Reconstruction: America’s Unfinished Revolution for a graduate seminar in US Political History at Georgetown University, I realized that many of the economic, legislative, and political issues of that period are intimately tied to the use of natural and agricultural landscapes: fights over land redistribution (or the lack thereof), crop lien legislation, animal theft laws, the timbering boom, and of course, the expansion of cotton production. Yet very few environmental histories of the US South even discussed the period between the end of slavery and the Gilded Age, and the dynamic literature on Reconstruction had failed to absorb any of the insights or approaches of environmental history.

I set out, then, to write an environmental history of Reconstruction in the South, and over time, narrowed the focus to the changes occurring in rural areas (rather than urban ones). As I worked on my dissertation, however, I realized that one cannot explain the events of Reconstruction without grappling with the war. Fortunately, a flowering of scholarship appeared on the environmental impacts of the Civil War around the time of my graduate studies, and so my project follows those works and asks simply, “what happened next?” If the Civil War was a truly environmental event, then one would assume those changes did not stop being relevant after 1865. As a result, my book is an environmental history of Reconstruction in the rural U.S. South that connects large-scale economic changes of the period, such as sharecropping, the expansion of cotton production, and the closing of the open range, to environmental changes wrought by the Civil War.

JF: In 2 sentences, what is the argument of Unredeemed Land?

EM: The Civil War and emancipation accelerated ongoing ecological change and destroyed traditional systems of land use in ways that hastened the postbellum collapse of the region’s subsistence economy, encouraged the expansion of cotton production, and ultimately kept cotton farmers trapped in a cycle of debt and tenancy. Southern farmers both black and white found themselves unable to “redeem” their lands and fortunes, with serious consequences for the long-term trajectory of the regional economy.

JF: Why do we need to read Unredeemed Land?

EM: I think that anyone interested in the Civil War, Reconstruction, race in America, economic inequality, or environmental history might find something here to like or, at least, argue with. So much of what we read in the news about the ecological and economic aspects of war zones in the Middle East, and the ways that environmental changes push people into refugee situations around the world—all those truths held in the American past, too. It’s time we started thinking about them.

EM: As an undergraduate, I wanted to go to medical school. However, I loved studying history, and performed well in those classes. I was attracted to the story-telling that happens in history classes and books, as well as the investigative work of piecing together past events. So, I combined coursework in both History and Biology, reluctant to give up either. When it came time to write my senior thesis for my History major, my undergraduate mentor in that department suggested I draw on my interest in the sciences, and I produced work that investigated early air pollution control efforts in Birmingham, Alabama. Through that experience, I decided I would rather research and write for a living than go to medical school. I was very, very fortunate to receive a doctoral fellowship to study environmental history with J.R. McNeill at Georgetown University, and haven’t looked back.

EM: Tentatively called “The First White Flight: Industrial Pollution and Racial Segregation in New South Cities,” my next book will investigate the role of environmental racism in racially segmenting the geographies of 19th-century cities. The poverty and debt of postwar cotton farming I describe in Unredeemed Land spurred tens of thousands of freed  people to abandon rural spaces in the decades after the Civil War and find employment in recently “reconstructed” cities such as Atlanta and Richmond; and newly established industrial centers such as Birmingham. Not only did minority enclaves or company houses exist among higher levels of pollution, filth, disease, and industrial contamination, but the white public’s representations of those conditions attached a persistent stigma both to people and place in these neighborhoods.

This project, then, argues that industrial pollution caused the cementing of an urban black/suburban white dynamic long before the Civil Rights Era, which, over time, reinforced disenfranchisement, engendered racially segmented economies, and allowed further environmental degradation.