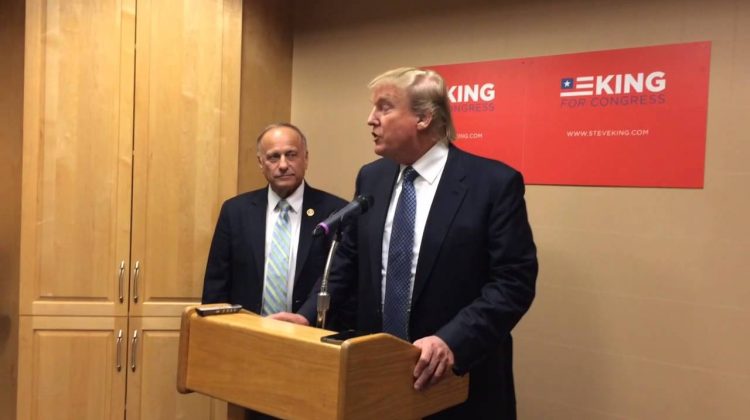 And we could go on.

Yet, he continues to win re-election.

One of his constituents, Dordt College professor and writer James Calvin Schapp, is not amused.  Here is a taste of his post “Tribal politics“:

Almost 75 percent of my neighbors, just about all of them church-goers, voted for a man who was scolded by his own Republican party’s election chairman for his unseemly bigoted comments, a man who on the day before the election offered up a slur to two Supreme Court justices for no other reason than what he said is what he thinks, what he believes.

Just about 75 percent of Sioux County voted for Steve King, the man internationally derided for bigotry, even by his own. No other member of Congress so willingly and frequently says things so universally recognized and understood as putrid.

Sometimes people who are not from here ask me how it is that northwest Iowa voted so overwhelmingly for a presidential candidate like Trump. The answer, sadly enough, has become more and more clear every day: because they voted their values.

In my many years as a writer–fiction, plays, meditations, histories, occasional essays–I’ve honored my religious and ethnic heritage. I’m a board member of the Sioux County Museum because I really do appreciate the history of my people, my tribe. It’s a story I love to tell–and have in many ways.

This morning I feel disowned.

Yesterday I said some would be angry and sad this morning, the morning-after.

Well, I am. I’m downright sick at heart and soul. Almost 75 per cent of Sioux County, Iowa, approve of Steve King.

They’re not my tribe. They’re his.

Thanks to my friend Doug Anderson for bringing Schapp’s post to my attention.