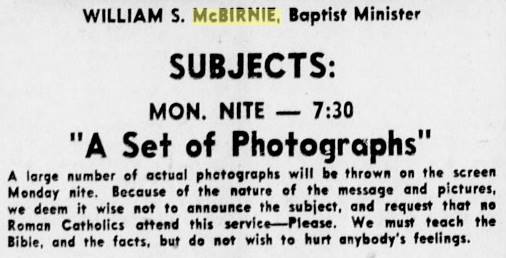 Aaron Griffith is a Postdoctoral Research Associate at the John C. Danforth Center on Religion and Politics at Washington University in St. Louis.  As part of his research, he recently came across an ad for a 1949 tent revival in San Bernardino, California.  The minister leading the revival was William S. McBirnie.  According to his 1995 obituary, McBirnie was a “conservative commentator” on his “Voice of Americanism” radio show, the pastor of the United Community Church of Glendale, and the founder of the California Graduate School of Theology.

This ad shows the connection between anti-Catholicism and fundamentalist revivalism in the mid-20th century:

On his Facebook page, Griffith writes: “T[hat] F[eel] W[hen] you want to be anti-Catholic, but you also don’t want to hurt anyone’s feelings.”

Here is a larger image of the description of the first night of McBirnie’s revival: