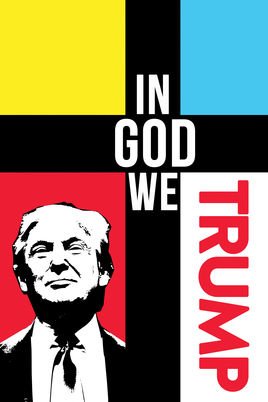 This is the name of filmmaker Chris Maloney’s new documentary.  Over at VOX, Tara Isabella Burton talks with Maloney.  Here is a taste of the interview:

So we’ve established that white evangelicals were willing to vote for Trump, even if it was by “holding their noses.” But I’m curious, next, about what justifications evangelicals have offered to defend that vote. From the “end justifies the means” logic to, say, the propagandistic notion that Trump was chosen by God directly, it seems we’ve seen a few different defenses. Can you tell me more about them?

That’s the question that’s at the center of the film. Certainly the Supreme Court was a really big part of it. Like [in making the film] I heard Christians, more than once, explain that, yeah, you know, Trump is maybe not a very good guy, but he’s going to change the court and then we won’t have legalized abortion anymore.

Or there’s the argument made by [prominent prosperity gospel preacher and Trump advisor] Paula White, that Trump “became a Christian” in 2015. So that’s how we can justify giving him our vote.

The most extreme narrative is, I looked at so much footage of television preachers saying that God had told them that he had chosen Trump to be the president. And so if he was God’s choice, every other thing that came up that they might object to about him was irrelevant because we don’t have to understand God’s choices. God works in mysterious ways. So if he’s chosen this guy to be president, some preacher on TV believes it, and then the preachers who pastor churches who watched that show then take the message from that and then pass it on to the congregation. That was a much bigger part of it than I think most people realized.

An interesting thing is that Kenneth Copeland, who’s one of those influential TV preachers, he had said, I believe, that same thing about Ted Cruz at one point when he thought Ted Cruz was going to get the nomination, like God chose Ted Cruz. And then when Trump got the nomination, instead it changed to “well, God chose Trump.”

Here is the teaser:

And here is a longer clip: