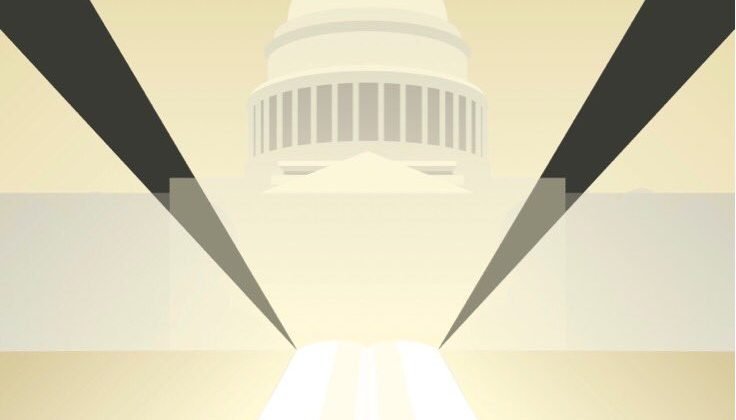 I spent the day on Wednesday at John Brown University (JBU) in Siloam Springs, Arkansas. (It was my first trip to the “Natural State”).  Trisha Posey, Director of the University Honors Program, and Daniel Bennett, Assistant Professor of Political Science, invited me to participate in the university’s 2nd Annual Reimagining Faith and Public Life event.

After a great dinner at the home of JBU president Chip Pollard, I was happy to share the stage for the main event with Jonathan Leeman, a Christian writer, theologian, pastor and editorial director of a Christian website called 9Marks.  Leeman is the author of How the Nations Rage: Rethinking Faith and Politics a Divided Age.  Trisha moderated a fruitful discussion about how evangelicals can move beyond a Christian Right approach to politics.

Reimagining Faith and Public Life was actually the culminating event of a day full of teaching and conversation at JBU.  It began with breakfast (Rikki Skopp is an absolutely amazing baker!) and fellowship with JBU honors faculty.  I then had the privilege of teaching Trisha’s first-year honors seminar “Faithful Leadership in Times of Crisis.”  Trisha and her students are studying historical examples of Christian leaders who led during difficult times.  So far they have looked at Sophie Scholl, Dietrich Bonhoeffer, and the monks of the medieval period. Later in the semester they will study the lives of Oscar Romero, John Woolman, Martin Luther King, Jr., Galileo, Leymah Gbowee, and a few others.  I am not sure if Abraham Lincoln can be considered a “faithful leader,” but he was certainly a leader in a “time of crisis.”  I chose to focus on his Second Inaugural Address as a theological reflection on the Civil War.  Lincoln’s religious take on the war was quite different from the writing and rhetoric of the leading Protestant theologians of the day.

After class I spent some time with one of Trisha’s students who is writing a very interesting paper on Reinhold Niebuhr’s critique of Billy Graham and mid-century American evangelicalism.  We chatted about the current state of the evangelical movement (is there such a thing?) and if there is anything that Niebuhr might be able to teach present-day evangelicals. After lunch with JBU faculty, I headed to Dan Bennett’s American Government class where I led students in a discussion of Chapter 1 of Believe Me, “The Evangelical Politics of Fear.”  Our discussion of “fear” led to a conversation about same-sex marriage and somehow ended with a focus on “nostalgia” and Christian nationalism.  Our discussion was all over the map, but the students seemed engaged. Finally, I had a chance to meet with the members of two faculty-staff JBU book clubs who have been reading Believe Me.  As I fielded questions about the book I continued to learn more about the strengths and weakness of my argument.  At some point a book has to go to the publisher, appear in print, and be consumed by the public. But I find that I am always refining my thinking about a project through an engagement with readers.  It is flattering to have your ideas taken seriously and it is especially flattering when those ideas are taken seriously by such a vibrant and engaged group of academics, human resource professionals, advancement officers, and students.

I felt at home all day at JBU.  I hope to return some time soon.

Stay tuned for the next stop on the Believe Me book tour: Sunday, October 28th at Emmanuel United Methodist Church in Laurel, Maryland.