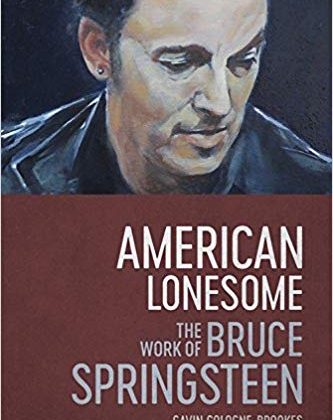 Here is a description from the LSU Press website:

American Lonesome: The Work of Bruce Springsteen begins with a visit to the Jersey Shore and ends with a meditation on the international legacy of Springsteen’s writing, music, and performances. Gavin Cologne-Brookes’s innovative study of this popular musician and his position in American culture blends scholarship with personal reflection, providing both an academic examination of Springsteen’s work and a moving account of how it offers a way out of emotional solitude and the potential lonesomeness of modern life.

Cologne-Brookes proposes that the American philosophical tradition of pragmatism, which assesses the value of ideas and arguments based on their practical applications, provides a lens for understanding the diversity of perspectives and emotions encountered in Springsteen’s songs and performances. Drawing on pragmatist philosophy from William James to Richard Rorty, Cologne-Brookes examines Springsteen’s formative environment and outsider psychology, arguing that the artist’s confessed tendency toward a self-reliant isolation creates a tension in his work between lonesomeness and community. He considers Springsteen’s portrayals of solitude in relation to classic and contemporary American writers, from Frederick Doug-lass, Nathaniel Hawthorne, and Emily Dickinson to Richard Wright, Flannery O’Connor, and Joyce Carol Oates. As part of this critique, he discusses the difference between escapist and pragmatic romanticism, the notion of multiple selves as played out both in Springsteen’s work and in our perception of him, and the impact of performances both recorded and live. By drawing on his own experiences seeing Springsteen perform—including on tours showcasing the album The River in 1981 and 2016—Cologne-Brookes creates a book about the intimate relationship between art and everyday life.