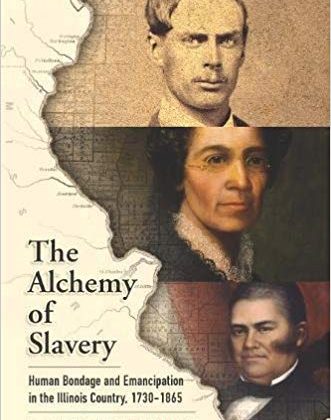 Scott Heerman is Assistant Professor of History at the University of Miami. This interview is based on his new book, The Alchemy of Slavery: Human Bondage and Emancipation in the Illinois Country, 1730-1865 ( University of Pennsylvania Press, 2018).

JF: What led you to write The Alchemy of Slavery?

SH:  I began with a question: how do you make a free society? I’m not the first to ask that question, but by focusing on Illinois before the Civil War I found a time and place where we didn’t have a good answer. I knew that slavery existed in Illinois when the French claimed it in the eighteenth century, and that eventually it became a “free state.” Yet I struggled to understand this change, as most of the forces that drove abolition in the north–a powerful free black community, newspapers and pamphlets, religious communities–seemed to be missing. Instead I found that each attempt to abolish slavery in the region, including the Northwest Ordinance of 1787, the first and second state constitutions, state supreme court rulings–failed to accomplish that task. In each instance, what I thought should have abolished slavery led only to a new variation on coerced labor taking root. In light of this I found myself forced to rethink many of the organizing concepts of the scholarship: free states and slave states, radical abolitionists and proslavery fire eaters, gradual and immediate emancipation. That this one very important place could confound so much of the conventional story led me to write The Alchemy of Slavery.

JF: In 2 sentences, what is the argument of The Alchemy of Slavery?

SH:  I argue that we need to set aside the idea that slavery was an institution, and instead we need to approach slavery as an adaptable set of power relationships. Slavery was not a status that people held; masters enslaved people using a wide range of ever-changing coercive practices, which for decades allowed them to reinvent slavery in the face of abolition laws.

JF: Why do we need to read The Alchemy of Slavery?

SH: This book shows that slavery and freedom are both historical processes. It is easy to think of slavery as a fixed status, but this book encourages us to think of it as an every    changing power relationship. As a consequence, slavery could look very different over time: Illinois Indians raided and exchanged their captives, Europeans held African-descended people in lifelong chattel conditions, U.S. settlers in Illinois held African Americans as lifelong, uncompensated, servants, and masters kidnapped free people, turning them into slaves. People in each of these conditions were slaves, and yet their lives looked very different. When we recognize just how adaptable the power to enslave people is we can appreciate many of the hallmarks of American history differently.

SH: As an undergraduate student, a professor asked me a question that I still think about most days: how do the powerful stay in power? In time, I recognized that various hierarchies existed, both now and in the past, and some of them are seen as legitimate and others of them are seen as unjust. I could not stop wondering: how and why does society sort these various forms of inequality? Most interesting of all: how do kinds of inequality move from just to unjust, from being seen as normative to being seen as an affront to the values of society? It is that question of how the powerful adapt, or don’t, to changing norms in order to stay in power that motivated me to become a historian.

SH: I am at work on a book project that studies the international kidnapping of freed men and women. I look at cases when enslavers carried freed people, for instance, from the U.S. North to the Caribbean, from the British Caribbean to Havana, and from Haiti to the U.S. South.  It argues that there was a connection between abolition and the rise of more powerful nation states during the early nineteenth century. It is commonplace to argue that Civil War emancipation demanded new forms of state power—chiefly birthright citizenship and Civil Rights legislation that offered a ringing endorsement of black freedom and equality before the law. Yet those developments are almost always cast as a consequence of the wartime experience and crucible of radical reconstruction. Pushing against this trend, my work explores how kidnapping cases inspired new kinds of state action, and pushed ahead new types of governance. As Prime Ministers and Cabinet Secretaries, antislavery activists, and Afro-descended people tangled over these cases they confronted profound questions about the laws of nations. Theories and conceptions of subjecthood and citizenship were at the core of these cases. As various different governments confronted these cases they worked through what it meant to be part of a sovereign nation, and what rights and protections extended to its people.