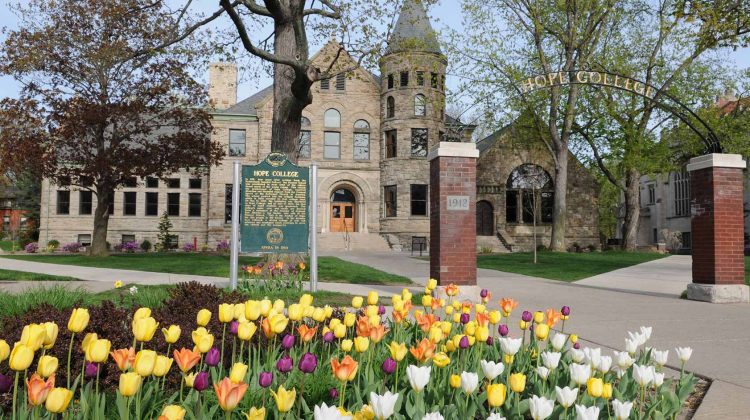 During the Q&A session at Taylor University on Tuesday night someone asked me if my work at a college with Anabaptist roots (Messiah College) influenced what I wrote in Believe Me: The Evangelical Road to Donald Trump.  It was a great question–one that I have thought a lot about.  Historian Jared Burkholder made the same observation a few months ago.

This question was on my mind again on Wednesday afternoon when I spoke to a group of faculty, students, and staff at Anabaptist Mennonite Biblical Seminary (AMBS) in Elkhart, Indiana.  During the conversation following my talk, I realized that a lot of my thinking about religion, politics, justice, and public life is very compatible with the views of my Mennonite brothers and sisters, especially when it comes to the Christian nationalism that drives so many white evangelicals.  I felt at home at AMBS.  At the same time, I also realized that Anabaptism and Evangelicalism are quite different, especially when it comes to the theology of the atonement and the role that doctrine plays in Christian identity.  After talking to folks at AMBS, I realized that I need to go back and re-read Burkholder and David Cramer’s book The Activist Impulse: Essays on the Intersection of Evangelicalism and Anabaptists. Thanks to Janna Hunter-Bowman for the invitation and thanks to everyone who came out for the talk, including David Cramer and AMBS president Sara Wenger Shenk.

After the AMBS visit I drove up to Holland, Michigan for an evening talk at Hope College in Holland, Michigan.  We had a great turnout and one of the more engaging Q&A sessions of the tour.  Thanks to Jeanne Pettit of the Hope history department for the invitation.  It was also great to see my old friend and Hope historian Fred Johnson and meet so many Hope professors, including Lynn Japinga, Aaron Franzen, Wayne Tan, Mark Baer (who is leading a church reading group on Believe Me), Janis Gibbs, Steven Bouma-Prediger, David Ryden, and Virginia Beard.

I tweeted about my favorite moment of the night:

I should add that as this person asked the question, a woman in the back row was pounding her open palm against her head in disbelief. #believemebook https://t.co/AayQ3tVkVr

On to Calvin College for the meeting of the Conference on Faith and History. See you there.