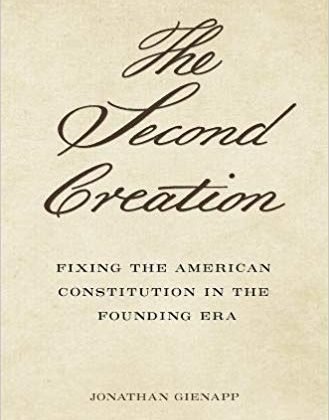 Jonathan Gienapp is Assistant Professor of History at Stanford University. This interview is based on his new book The Second Creation: Fixing the American Constitution in the Founding Era (Belknap Press: An Imprint of Harvard University Press, 2018).

JF: What led you to write The Second Creation?

JG: I had long been interested in Revolutionary American political culture, intellectual history, and constitutionalism. Initially, I focused most of my attention on the period leading up to the drafting of the United States Constitution. Like so many historians, I instinctively distinguished the pre- and post-1788 periods, assuming that the formal ratification of the Constitution marked a sharp break in American history and a convenient way of bringing the Revolutionary period to a close. But then I found myself attracted to the 1790s and the post-ratification period. I was especially drawn to early debates over constitutional interpretation, not least because they had been far less studied than more famous debates that took place at the Constitutional Convention and then during ratification. Moreover, I began realizing that these early constitutional debates were sprawling and untamed. They often began focused on something specific before quickly morphing into broad, unfettered debates that grappled with what seemed to be almost meta-constitutional questions. That is, participants were not simply applying the Constitution to emerging problems; more fundamentally, they had to gain a deeper understanding of what the Constitution itself even was in order to even begin to know how to apply it. It became clear to me that participants kept having to discuss these broader matter because they were attempting to engage in constitutional debate without the benefit of any working rules for acceptable constitutional argument. They had to invent those rules, those practices, those norms as much as they could simply apply them. In other words, they had to invent the practices that made the Constitution intelligible and usable. From there I became really taken with the idea that the post-1788 period was as a much a chapter in constitutional creation as it was one in constitutional interpretation and it was worth reevaluating the whole period from that perspective.

JF: In 2 sentences, what is the argument of The Second Creation?

JG: It is often assumed that the United States Constitution was fully created in 1787 and 1788 when it was written and ratified. But because so much about the Constitution was shrouded in uncertainty even after these processes were complete, debates immediately following the document’s ratification did as much to give the Constitution its definitive identity as anything that came before.

JF: Why do we need to read The Second Creation?

JG: My father was an American historian so I like to say that the apple didn’t fall far from the tree. But I was first intensely drawn to early American history as an undergraduate when I read Bernard Bailyn’s The Ideological Origins of the American Revolution and shortly thereafter Gordon Wood’s The Creation of the American Republic for the first time. What I remember most vividly was less the content or even the arguments of either (although both were stimulating) but more the approach that each embodied: that recapturing the intricacies of the intellectual world of the American Revolution required a meticulous exhumation of a lost conceptual world. I was drawn to the idea that the study of history, even a period and place as seemingly familiar as Revolutionary America, required this kind of deep excavation. I found the past so much more interesting when I realized that understanding it required this kind of careful, immersive work. And I found the historian’s task that much more urgent since it seemed to primarily consist of learning how to climb inside other people’s heads and make sense of their world from their perspectives. It required bracketing one’s own working assumptions and learning how to think like somebody else once had. I have never lost sight of those lessons and, as much as my thinking has changed and developed since those early days, those experiences remain formative. They continue to explain why I became a historian.

JG: My next project seeks to rethink the rise of American democracy in the late 18th and early 19th-century United States by interrogating, not how American political culture came under greater popular control, but how a peculiar understanding of “democracy” emerged in the first place. A technical concept in political science up to that point, “democracy” came to acquire novel and expansive meaning during this period, morphing into the definitive norm by which all modern political practice has come to be judged. To explain why, classic accounts often focus on popular political transformations. But these transformations did not necessitate a corresponding shift in political language and consciousness. They could not, in their own right, force anybody to call such transformations or the practices they initiated “democratic.” During this period, “democracy” and its cognates took on profoundly new meanings as it was aggressively mobilized in several distinct contexts and in service of several distinct purposes. The project seeks to understand why Americans’ usage and understanding of this crucial word and concept transformed in such fundamental ways–why democracy became such an authoritative standard of political life.