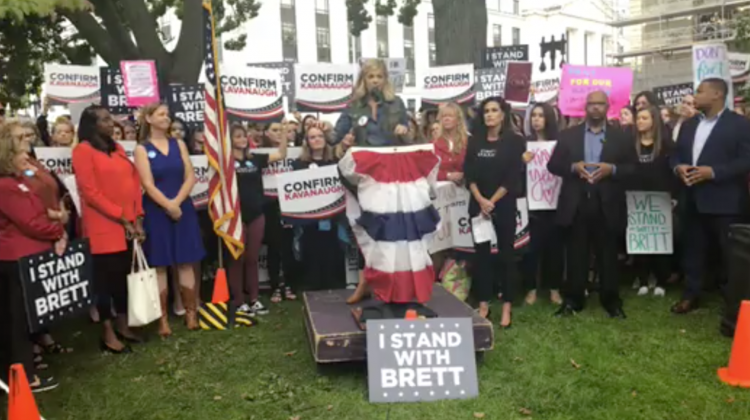 And their president, court evangelical Jerry Falwell Jr., was with them.

About 300 Liberty University students traveled to Washington, D.C. Thursday to support Supreme Court nominee Brett Kavanaugh, who is under fire with two accusers alleging sexual assault and another claiming to have witnessed such behavior.

“We wanted [Kavanaugh’s] voice to be heard … and to support him and his family,” said Victoria Belk, an LU student and president of LU’s Young Women for America, a college chapter of CWA. “True equality is hearing from both sides; hearing him out was important to us.”


Read the rest here.  The Huffington Post has posted a video of the rally here.

Over at Religion News Service, Jason Lupfer argues that conservative evangelical support for Kavanaugh will cost them.  Here is a taste of his piece:

Politically,  white conservative Christians have been invaluable to the country club wing of the Republican Party, which put their zeal to work to end an era of social progress on civil rights, economic equality and fiscal health. The old guard used its newfound clout to enact deficit-financed tax cuts, decimate the labor movement and shift an ever higher percentage of the national income to those at the very top.

Meanwhile, their own principles suffered.

Few white evangelicals or conservative Catholics were put off by the party’s embrace of leaders who demonized Islam, disparaged undocumented immigrants and rolled back voting rights. They helped ensure that the Republicans ended up abandoning morality altogether and nominating for president a vulgar, spiteful man who boasted of his own sexual assaults.

Now it seems that president has nominated a judge who shares the political values of conservative evangelicals but may have violated many of their morals. Drunken parties and sexual assault are the kinds of things that Liberty University — and Concerned Women for America — have abhorred in the past.

But they no longer seem to give these conservative evangelicals pause.

So often when religion and politics mix, religion is sullied. As the evangelicals have risen in prominence, we have heard less and less about the Old, Old Story, and wondered if they even believed it at all.

The country has suffered under this partnership as well.

Read the entire piece here.  Much of what Lupfer writes here meshes well with my own work in Believe Me: The Evangelical Road to Donald Trump.