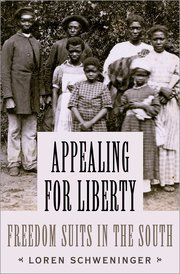 Loren Schweninger is Professor Emeritus of History at UNC Greensboro. This interview is based on his new book Appealing for Liberty: Freedom Suits in the South (Oxford University Press, 2018).

JF: What led you to write Appealing for Liberty?

LS: For many years I have been interested in freedom suits in the South, beginning in 1970 when I discovered a suit for a family–Thomas/Rapier–that became the basis for my doctoral dissertation at the University of Chicago on James Rapier and Reconstruction.  During the period 1991 thru 2009 I headed a project titled “The Race and Petitions Project” at the University of North Carolina at Greensboro (now on line at the University with some 60,000 “hits” each month and part of Proquest’s Slavery and the Law Collection”. Most of the freedom Suits in this study come from this collection.

JF: In 2 sentences, what is the argument of Appealing for Liberty?

LS: The book argues that African Americans were involved in contacting lawyers and bringing the suits to court and that to a surprising degree many among them are successful, in about three fourths of the cases.

JF: Why do we need to read Appealing for Liberty?

LS: I became an American historian in 1966 under to tutorship of John Hope Franklin, a life-long mentor and friend. I’m now a professor emeritus, retired in 2012, at the University where I taught African American history for forty years.

LS: With regard to my next project I’ve been thinking about an examination of Slavery and Freedom in the District of Columbia, but this is in its very early stages.