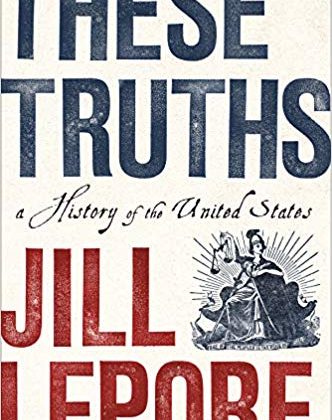 I love seeing two prolific historians engage one another.  Over at The New Republic, Michael Kazin (Georgetown) reviews Jill Lepore’s (Harvard) new book These Truths: A History of the United States.

Lepore…in her new book, These Truths, declines the temptation either to condemn the national project or to celebrate it. For her, the United States has always been a nation wrestling with a paradox, caught between its sunny ideals and its darker realities. “Between reverence and worship, on the one side, and irreverence and contempt, on the other,” she writes, “lies an uneasy path.” The American Revolution was far more than a mere change of power from one group of well-to-do white men to another. “The United States,” writes Lepore, “rests on a dedication to equality.” Yet throughout her deftly crafted survey, she also makes clear how often citizens and their leaders failed to implement this ideal or actively betrayed it. She borrows her title from the Declaration of Independence, to signal both the standard of reason and equality that Americans profess and how their deeds have fallen short of it.