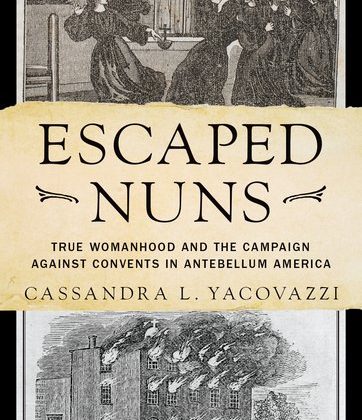 Cassie Yacovazzi is Visiting Assistant Professor of History at University of South Florida Sarasota-Manatee. This interview is based on her new book Escaped Nuns: True Womanhood and the Campaign Against Convents in Antebellum America (Oxford University Press, 2018).

JF: What led you to write Escaped Nuns?

CY: I was initially interested in anti-Catholicism in early America. As a person with a religious background, I wanted to know more about how nationalism, popular culture, and patriotism could shape who was considered religious insiders and outsiders in America. In my research, I kept coming across brief references to Maria Monk, an escaped nun and the listed author of Awful Disclosures of Hotel Dieu. Her convent exposé of 1836 was a phenomenal success, selling over 300,000 copies before the Civil War. But Monk was a fraud, having never lived in a convent as a nun or otherwise. I wanted to know more about why this book was so popular, what it revealed about anti-Catholic bias, what debates the book sparked, and who the real Maria Monk was. I set out to write a book about Maria Monk, but as I researched, I realized opposition to nuns was a much larger phenomenon. I came across dozens of escaped nun books, learned of various convent attacks, noticed denunciations of convent life littered throughout anti-Catholic materials, and found significant overlap between antebellum reform movements, such as abolition, the common school movement, urban reform, and anti-Mormonism and the campaign against convents. I realized there was a story there, and I wanted to learn and tell that story.

JF: In 2 sentences, what is the argument of Escaped Nuns?

CY: The campaign against convents in antebellum America was a far reaching movement, as popular as abolitionism, the common school movement, urban reform, and anti-Mormonism. While anti-Catholic and nativist impulses propelled this campaign in part, nuns’ nonconformity to female gender norms of true womanhood—their rejection of marriage, motherhood, and ideals of domesticity—rendered them conspicuous targets of attack among the vanguards of accepted behavior.

JF: Why do we need to read Escaped Nuns?

CY: The history of anti-Catholicism in America is well documented and established. The animus against nuns and convent life, however, has often simply occupied a paragraph or footnote in this history. Yet nuns served as a barometer of American attitudes toward women. For many, the veiled nun represented a waste or corruption of womanhood; as Mother Superior she embodied the wrong kind of woman, masculinized by her position of authority. This image proved stirring enough to lead men into action to “liberate” women from their “captivity” and expose and demolish convents or “dens of vice.” In doing so, many Protestant Americans believed they were protecting women and Protestant American civilization. In the face of rapid urbanization and western expansion this mission appeared imperative. Escaped Nuns traces the facets of anti-convent sentiment, shedding light on a major contest for American identity at a time of rapid demographic and cultural change.

CY: For me deciding to become an American historian was a gradual decision rather than a single moment thing. I loved my history courses in high school and especially in college. I majored in Liberal Arts, focusing on History, Philosophy, and English, not really knowing what subject in which to specialize. When it came time to graduate, there was something in me that wanted to stay in academia and continue to pursue the life of the mind. I had found a sort of “home” there. But what would be my focus? I chose history because I thought I could incorporate my other loves of philosophy and literature. I also chose history because it was the subject that best helped me place my worldview, beliefs, and values in context. While in graduate school at Baylor University and then the University of Missouri, history became a way of life. Through acting like a historian I became one. It was in some ways accidental, but I feel comfortable, challenged, and inspired in this role.

CY: My next project is in some ways a big change from my first. The topic for my next book is Mary Kay—the woman and the cosmetics empire. I’m exploring Mary Kay’s personal story, the growth of her company, and the subsequent Mary Kay culture in the context of women in business, the history of beauty, the feminist movement, and the intersection of gender, capitalism, and religion.