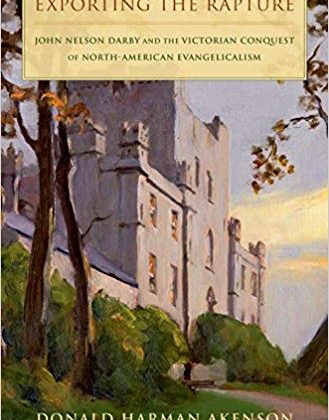 Donald Akenson is Douglas Professor of Canadian and Colonial History at Queen’s University. This interview is based on his new book Exporting the Rapture: John Nelson Darby and the Victorian Conquest of North-American Evangelicalism (Oxford University Press, 2018).

JF: What led you to write Exporting the Rapture?

DA: This is the second volume in my three-volume set on where and how radical apocalyptic millennialism was built into its central position in American conservative evangelicalism. The first volume, Discovering the End of Time was published in 2016 by McGill-Queens University Press.

JF: In 2 sentences, what is the argument of Exporting the Rapture?

DA: The big argument is that the ideological core of American evangelicalism was formed overseas and in the period 1860ff began to be energetically imported into North America. Surprisingly, the germinal ground was southern Ireland in the 1820s and thereafter. The entry point was the Great Lakes Basin and the subsequent process was equally a matter of Canadian and US assimilation of imported concepts. That is simple to state, but the process was anything but linear.

JF: Why do we need to read Exporting the Rapture?

DA: Mostly to help us escape the mortmain of American Exceptionalism, which, despite the heroic efforts of some fine historians, too frequently comes forth as American Parochialism.

DA: I am an historian of Ireland, and of the Second British Empire and of the diasporas that had their origin in the British Isles. For a long time now, I have been arguing that in diaspora studies religion not only counts, it counts a great deal—despite its being marginalized by most historians of physical migration and by their counterparts in the field of cultural studies.

DA: To complete the third volume of the study and to bring the story up to the first decade of the twentieth century, when the new apocalyptic evangelicalism won.