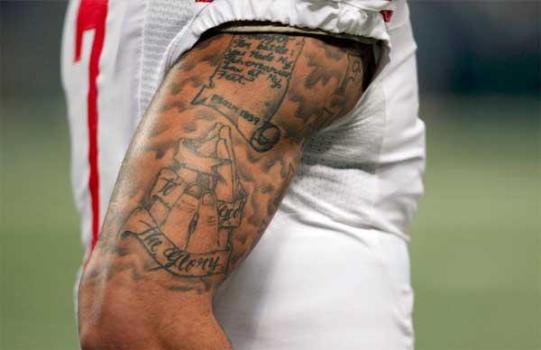 Many on the Christian Right despise Colin Kaepernick for taking a knee during the playing of the national anthem. His decision to kneel before the American flag was a form of protest against systemic racism in America.

Recently a reader of The Way of Improvement Leads Home blog asked me check out the “Personal Life” section of Kaepernick’s Wikipedia page.  Here is what I found:

Kaepernick was baptized Methodist, confirmed Lutheran, and attended a Baptist church during his college years.[117] Kaepernick spoke about his faith saying, “My faith is the basis from where my game comes from. I’ve been very blessed to have the talent to play the game that I do and be successful at it. I think God guides me through every day and helps me take the right steps and has helped me to get to where I’m at. When I step on the field, I always say a prayer, say I am thankful to be able to wake up that morning and go out there and try to glorify the Lord with what I do on the field. I think if you go out and try to do that, no matter what you do on the field, you can be happy about what you did.”[118]

Kaepernick has multiple tattoos. His right arm features a scroll with the Bible verse Psalm 18:39 written on it. Tattooed under the scroll are praying hands with the phrase “To God The Glory” written on them. To the left of both the scroll and praying hands is the word “Faith” written vertically. His left arm features a Christian cross with the words “Heaven Sent” on it referring to Jesus. Written above and below the cross is the phrase “God Will Guide Me”. Written to the left and right of the cross is the Bible verse Psalm 27:3. His chest features the phrase “Against All Odds” and artwork around it that represents “inner strength, spiritual growth, and humility”. His back features a mural of angels against demons.[119][120][121] Near the end of the 2012 NFL season, Kaepernick’s signature touchdown celebration involved flexing and kissing the bicep of his right arm. Kaepernick says he kisses his “Faith”, “To God The Glory”, and Psalm 18:39 tattoos and the reason he does the celebration is because “God has brought me this far. He has laid out a phenomenal path for me. And I can’t do anything but thank Him.”[119]

I don’t know the current state of Kaepernick’s spiritual life or how he currently understands his religious identity (he girlfriend, Nessa Diab, is Muslim), but all of this sounds pretty evangelical to me.  This sounds like a job for my Messiah College colleague Paul Putz, an expert on the history of sports and Christianity.

If the Wikipedia page (you can follow the footnotes through the links) is correct, would this change the minds of Kaepernick’s Christian Right critics?  Would School of the Ozarks consider renegotiating their contract with Nike?  Would this guy put his scissors away?  Probably not, but if Kaepernick is a “brother in Christ” it would make it a bit more difficult to ostracize him.