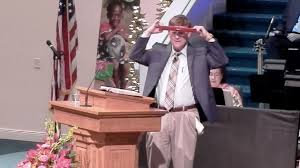 Rev. Mack Morris is the pastor at Woobridge Baptist Church in Mobile, Alabama.  On Sunday he took a pair of scissors and cut-up a Nike headband and wristband.  During the sermon Morris said “America may not be the best country in the world and we have a lot of faults, but I tell you what, a lot of folks died for the sake of what the flag represents.”  The congregation gave him a standing ovation.

Here is a taste of John Sharp’s piece at AL.com:

The Rev. Mack Morris took a hold of an old Nike headband and a wristband, held them both up before a packed church, and cut them.

“I ain’t using that no more,” said Morris, the senior pastor at Woodridge Baptist Church in west Mobile during his weekly Sunday sermon.

The reason? Morris, during a sermon titled “The Storms of Life,” said it was in protest to the Oregon-based apparel company’s recent advertising campaign centered around Colin Kaepernick, the professional football player who was the first athlete to take a knee during the national anthem that triggered a firestorm of controversy that exists to this day.

Kaepernick’s protest centered around concerns about police behavior and racial injustices in America.

What does Colin Kaepernick, Nike, or the national anthem have to do with a Sunday morning worship service?

And yes, a lot of folks did die for the sake of what the flag represents.  They died for Colin Kaepernick’s right to take a knee for the purpose of calling attention to our failure to live up to our highest ideals.