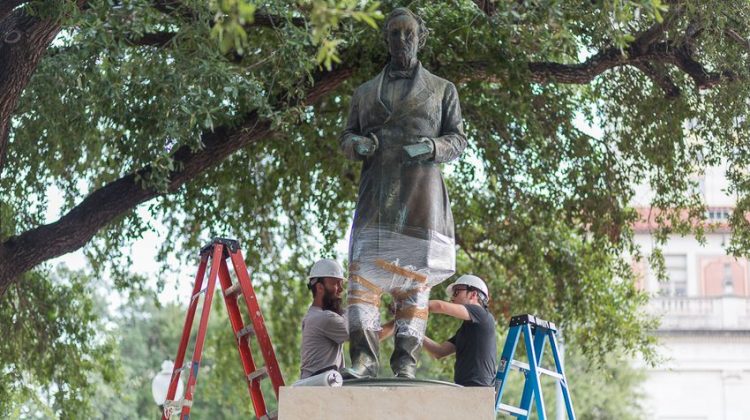 What should we do with Confederate monuments?  Should they be destroyed?  Should they remain standing?  Should we supplement them with additional monuments or  interpretive signs and plaques?

In 2015, the University of Texas at Austin moved a bronze statue of Confederate President Jefferson Davis from a public space on campus to an exhibit at the university’s Dolph Briscoe Center for American History.

Over at The Chronicle of Higher Education, Cailin Crowe describes what happened next:

The Davis statue’s exhibit, “From Commemoration to Education,” was unveiled last year in tandem with renovations to the Briscoe Center’s first floor. The exhibit chronicles the statue’s life from its 1916 commissioning by George W. Littlefield, a Confederate veteran and the university’s largest original benefactor, to its removal, in 2015.

The Briscoe Center also features the statue’s campus life with an interactive display that includes digitized documents. So far, the exhibit has received largely positive feedback from students and professors because the statue was moved from a commemorative space to an educational one, Wright said.

Instead it has become a learning tool for academic conversations. “The object itself has sort of developed this second life, where it now acts as a teaching moment,” he said.

I would encourage the University of North Carolina to do the same with Silent Sam.